Diagram showing the habitable zones around Kapteyn's Star and the Sun and the planets within them. 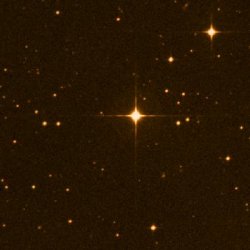 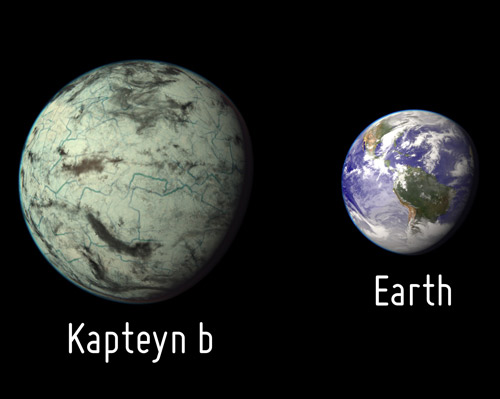 Size comparison of Kapteyn b and Earth.

Kapteyn's Star (HD 33793) is a nearby red dwarf in the southern constellation Pictor; it has the second largest proper motion (8.72" per year) of any star, after Barnard's Star. It is also the nearest halo star (see galactic halo) to the Sun, the nearest star that orbits the Galaxy backward, and a high-velocity star (radial velocity +242 km/s). Along with 16 other stars, it forms a moving cluster and appears to have originated in Omega Centauri, a globular cluster that may be the remains of a dwarf galaxy that collided with the Milky Way. Kapteyn's Star is named after Jacobus Kapteyn, who discovered its large proper motion in 1897.

Two planets have been found around Kapteyn's Star. One of the planets, Kapteyn b, is a super-Earth, at least 5 times as massive as our own world, moving in an orbit that is less than half the size of Mercury's orbit around the Sun. Even at this small distance from its star, Kapteyn b receives only 45% of the light that we enjoy from the Sun, so that if it were Earth-sized any water on its surface would be frozen solid. But because Kapteyn b is a super-Earth it very likely has a denser atmosphere which may raise its surface temperature enough to support liquid water. What's more it is about 11.5 billion years old – more than double the age of the Earth – so that it has had plenty of time to evolve life.