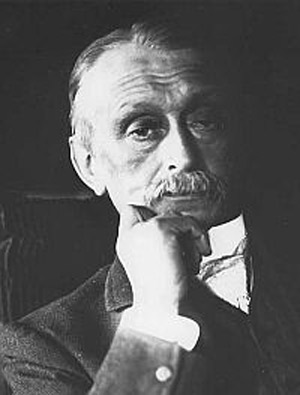 Jacobus Kapteyn was a Dutch astronomer who discovered star streaming, now known to be the observed effect of the rotation of the Milky Way Galaxy, and compiled the Cape Photographic Durchmusterung of almost half a million stars from photographs taken in South Africa by the Scottish astronomer David Gill.

Kapteyn studied at Utrecht University and served as professor of astronomy at the University of Groningen from 1878 to 1921. After his work on the Durchmusterung he was involved with a program of photographically determining the parallaxes of 10,000 stars, during which he discovered the high-parallax star now known as Kapteyn's Star and the fact that there are two preferred streams of stellar motion. In 1906 he inaugurated a plan to measure the positions, magnitudes, spectral types, and proper motions of stars in selected areas of the sky with a view to determining the shape and structure of the Galaxy (then thought to be the entire universe). Kapteyn's selected areas, as they became known, consisted of 206 areas, each about 1° × 1°, uniformly spaced at about 15° intervals over the whole sky, plus 46 others in regions of special importance such as around the galactic poles.

From an analysis of the plates, Kapteyn and fellow Dutchman Pieter van Rhijn (1886–1960) came up with a model, known as Kapteyn's Universe, which was correct in some details. It described a lens-shaped stellar system whose density decreased away from the center. However, its estimate of the size of the Galaxy (40,000 light-years across) and, in particular, its placement of the Sun only 2,000 light-years from the center, were incorrect because of the lack of knowledge of interstellar absorption.