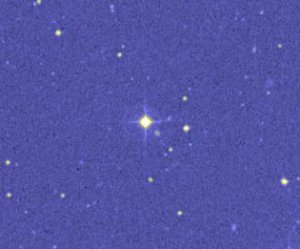 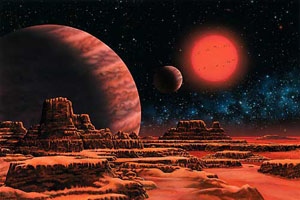 The Gliese 876 system, as seen from a hypothetical moon of the outer planet. Artist: Lynette Cook, © 2000.

Gliese 876 is a red dwarf around which has been found a planet with about twice the mass of Jupiter. This is one of the closest known exoplanets to the Sun and the first to be detected and confirmed in orbit around a dwarf star. Although Gliese 876b is considerably closer to its primary than Mercury is to the Sun, it has an estimated surface temperature of only -75°C due to the red dwarf's low luminosity. The high mass of Gliese 876b suggests that it is a gas giant and therefore probably unsuitable, in any case, to terrestrial-type life. Any large moons that it might have, however, might offer more clement conditions for life as we know it. The relatively high eccentricity of the planet's orbit provides another reminder that our own solar system is not necessarily representative of planetary systems as a whole.