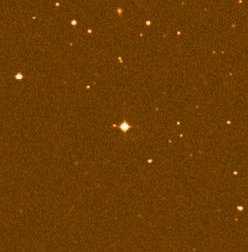 Ross 128 is a nearby red dwarf that is also a flare star. Also known by its variable-star name FI Virginis, it lies in the constellation Virgo near the line of the ecliptic, at a distance of 10.92 light-years (3.35 pc). Ross 128 was discovered in 1925 by Frank Elmore Ross who first reported it in his 'Second List of New Proper-Motion Stars', Astronomical Journal (36:856). Its nearest neighbor is Wolf 359, at a distance from it of 3.79 light-years (1.16 pc).

In 2017, astronomers announced that they had detcted unusual radio signals coming from what appeared to be the vicinity of Ross 128. The signals were first observed on May 13, 2017, at 0053 GMT, and "consisted of broadband quasi-periodic non-polarized pulses with very strong dispersion-like features". The origin of the signals has yet to be explained but three main possibilities have been suggested: emissions similar to solar flares. emissions from another object in the field of view of Ross 128, or a burst from a high orbit satellite.

As in the case of a number of other stars that are either near neighbors of the Sun or bright stars in our night sky, Ross 128 has made appearances in science fiction. In Gregory Benford's Across the Sea of Suns (1984), it is depicted as having a planet with a large moon that is home to a race of intelligent amphibians. In the short story "Galactic North," by Alastair Reynolds, Ross 128 is the source of an outbreak of self-replicating machines (see von Neumann probe), which poses a threat to living things across the Galaxy.