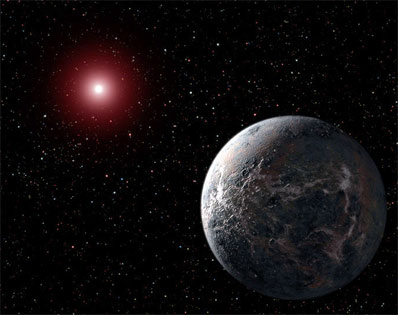 OGLE-2005-BLG-390Lb, at the time of its discovery, was the most Earth-like exoplanet discovered to date, in terms of its mass and distance from its parent star. OGLE-2005-BLG-390Lb has just five times the Earth's mass. It orbits a red dwarf star some 25,000 light-years away.

OGLE-2005-BLG-390Lb was found by the technique of microlensing. Its discovery involved a collaboration of three microlensing campaigns, PLANET/RoboNet, OGLE, and MOA, and researchers from 12 countries.

OGLE-2005-BLG-390Lb is almost certainly a terrestrial-type planet, made mostly of rock with a metallic core, like the Earth. However, its large orbit and cool parent star must make it a very frigid place; its estimated surface temperature is -220°C (-364°F). OGLE-2005-BLG-390Lb takes about 10 years to go around its orbit, which is roughly three times bigger than Earth's orbit around the Sun.