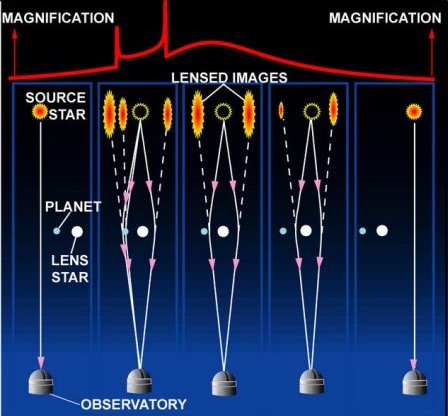 Microlensing is an effect, caused by a compact gravitational lens, which can be exploited in the search for and characterization of exoplanets. The term 'microlens' may refer to (1) massive compact objects located in external galaxies which bend and refocus the light of very distant light sources into multiple images separated by about a microarcsecond, or (2) compact lensing objects located within our own Galaxy which (due to their relative proximity) create images with a separation of milliarcseconds. The latter type are further subdivided into halo-resident MACHOs and disk-resident objects, which may include normal stars, brown dwarfs, and black holes. It is those disk-resident lenses which happen to be normal stars that are of specific interest in the detection of planetary systems. Their role in the search for extrasolar planets has been widely discussed.1, 2, 3, 4, 5, 6

When aligned with a more distant star, a microlens deflects, distorts, and brightens the image of the background source in a way that is sensitive to the strength and geometry of the lensing star's gravitational field. If the lensing star is orbited by a planet then the result can be a microlensing anomaly known as a binary lens, one of the characteristics of which is the appearance of so-called caustic curves in the plane of the source. As the source sweeps across the caustic curves, due to the relative motion of source and lens, sharp peaks appear in the light curve. Planets located at a distance between about 0.5 and 1.5 times the Einstein radius of their host star are said to be in the 'lensing zone,' since they are most likely to produce, with the help of the host, a sizable caustic structure. This distance is typically a few astronomical units, or approximately the distance of Jupiter from the Sun. Calculations (for example, by Bohdan Paczynski4) suggest that microlensing anomalies due to Jupiter-mass planets in Jupiter-like orbits will last about 1 to 3 days and be detectable in 10 to 30 percent of cases where such planets are in orbit around a lensing star that is located roughly halfway between us and the center of the Galaxy. Smaller mass planets will create smaller caustic structures which (1) reduces the chance of the background source passing directly behind the anomaly and (2), in cases where the source does pass behind the anomaly, results in a shorter and less sharp increase in brightness. The probability of detection and the duration of the lensing peak decrease as the square root of the planet's mass. So, an Earth-mass planet (320 times less massive than Jupiter), orbiting at about the radius of its host's Einstein ring, will give rise to a caustic structure 18 times smaller than that of a Jupiter-mass planet in a similar orbit, and any light curve variations caused by it will last for only a few hours rather than a few days.

Owing to the nature of this technique, the planetary systems it detects will typically be too remote for detailed studies to be carried out by other methods, such as spectroscopy, which might reveal signatures of life. On the other hand, microlensing is ideal for statistical studies aimed at determining the number and type of planets that exist in orbit around typical stars in the disk of the Galaxy, including planets that are similar to those within our own Solar System.

Current searches, such as PLANET and MOA, are collecting data which, following extensive computer analysis, should result in the detection of a number of planets more massive than Neptune with orbital radii between about 2 and 10 astronomical units. Indeed, several microlensing events have already been identified which may have been caused by massive extrasolar planets and one that may have been due to an Earth-sized world. Because microlensing events are impossible to predict, last for only a brief period, and do not repeat, their discovery is announced immediately so that other interested groups can obtain data while an event is in progress. Future programs, probably involving special-purpose telescopes and dedicated computers, are expected to be capable of finding many Earthlike planets.7, 8


Advantages and disadvantages of microlensing for planet-searching

• No need to wait for planets at large separations to complete one orbit around their host stars.
• Characterization can be achieved during an anomaly lasting only a few hours or days.
• Planets around remote stars can be detected even when the stars themselves are too faint to be seen directly. Microlensing is the only technique that does not rely on detection of light from the host star. Therefore, the technique is not biased against low-luminosity stars.
• The mass ratio between a planet and host star, and the ratio of planetary separation to Einstein ring radius, can be determined directly from the shape of the light curve.
• Microlensing is more sensitive to smaller-mass planets than most other techniques and is the only method (with the exception of pulsar timing) sensitive to Earth-mass planets with orbital radii of a few astronomical units.

• Since alignment between lensing star/planetary system must be precise to produce significant lensing, a detectable microlensing signal will only occur one time per planetary system. There is not usually a chance to repeat the observation if an opportunity is missed.
• Planets detected by microlensing will normally be too far away to allow other studies to be carried out which rely on detecting the light from the planets or their host stars.