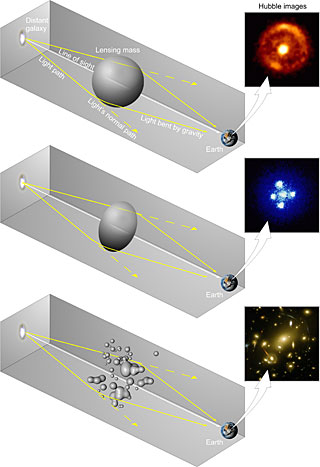 Gravitational lenses produce different shaped images depending on the shape of the lensing body. If the lens is spherical then the image appears as an Einstein ring (in other words as a ring of light) (top); if the lens is elongated then the image is an Einstein cross (it appears split into four distinct images) (middle), and if the lens is a galaxy cluster, like Abell 2218, then arcs and arclets (banana-shaped images) of light are formed (bottom). Image credit: ESA.

A gravitational lens is the gravitational equivalent of a magnifying glass: the focusing or distorting effect produced when a concentrated mass lies along the line of sight from an observer to a more distance light source. Typically, the distant source is a quasar and the lensing mass is a galaxy lying between the quasar and Earth.

Gravitational lenses arise from the warping of spacetime around a massive object, as described by Einstein's general theory of relativity and first discussed by Einstein in 1936. Light rays, in following the shortest path through a curved region of spacetime, are deflected. But the effect is not as simple as that produced by an ordinary glass lens. Instead it is comparable to the distortion produced by looking through the base of a wineglass. Depending on the geometry of the gravitational lens, the resulting image of the lensed object may be an arc, a complete circle (known as an Einstein ring), or a series of multiple images, as in the case of the Einstein Cross. Dozens of examples of cosmic-scale gravitational lenses have been discovered since the first – the so-called Double Quasar (see below), in 1979.

The Double Quasar (Q0957+561A/B) was the first confirmed case of a gravitational lens. It consists of two images, 5.7 arcsec apart, of the same quasar, and results from the gravitational effect of an intervening cluster of galaxies that lies about 3.5 billion light-years away. The Double Quasar was discovered in 1979 and lies in the constellation Ursa Major at RA 10h 1.3m, Dec +55° 54'.

An Einstein ring is a gravitational lens effect in which the image of a remote background object, such as a quasar, is distorted into a ring by a foreground galaxy. A perfect ring will only result if the source, the lensing object, and the observer are exactly lined up, and, in addition, the mass of the lensing object is evenly distributed. An Einstein ring image can be up to 30 times brighter than the image of the distant galaxy would be in the absence of the lensing effect.

A few good approximations to Einstein rings have been found, such as MG1131+0546 and B1938+666. In other cases, where the alignment is not perfect, the gravitational lens produces one or more arcs.

The Einstein Cross (G2237+030) is the most spectacular of the well-attested instances of gravitational lenses that involve a quasar and foreground galaxy. The Einstein Cross consists of four symmetrically placed images of the same quasar, which lies 8 billion light-years away and almost directly behind the nucleus of a galaxy that is only 500 million light-years away. The alignment is so close that if the lens effect could be removed, the quasar would appear within 0.05" of the galaxy's nucleus. The system was discovered in the course of a redshift survey by the Smithsonian Center for Astrophysics by John Huchra (1948–), and is sometimes referred as the Huchra Lens. Einstein crosses form when source and lens are in alignment with the observer but the lensing mass is unevenly distributed. When there is alignment plus even distribution of the lensing mass the result is an Einstein ring.

Gravitational lensing also occurs on a smaller scale, known as microlensing, when a dark object in our Galaxy passes directly in front of a more distant star (for example, one of the stars in the Magellanic Clouds) and makes its image brighten briefly. Microlensing can be used as a sensitive method of searching for exoplanets and MACHOs. If the lensing object happens to be a star and its planetary system, details about the orbiting planets can be worked out from observations of how the lens affects the light of a background star during alignment.