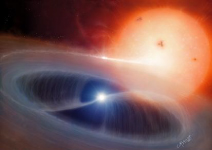 A DQ Herculis star, also known as an intermediate polar, is a magnetic cataclysmic variable in which the white dwarf component generates a magnetic field on the order of 106 to 107 gauss – extremely powerful but weaker than the field associated with an AM Herculis star. The type star, known by its variable star name of DQ Herculis, lies in the constellation Hercules and was seen in outburst as Nova Herculis 1934.