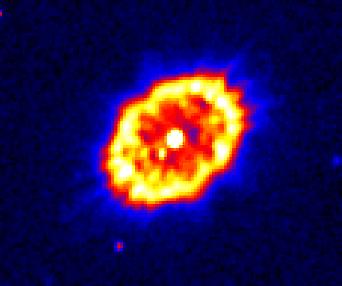 Image of DQ Herculis taken in 1993 by the Isaac Newton Telescope.

Nova Herculis 1934 (DQ Herculis) is a classic slow nova, discovered on Dec 12, 1934. It peaked nine days later at magnitude 1.5 and then began to fade. Now known more commonly by its variable star name, it is the prototype of the DQ Herculis stars, also known as intermediate polars.

Observations have revealed the system to be an eclipsing binary, composed of a white dwarf and a red dwarf, with an orbital period of only 4 h 39 min. In addition, a flickering every 71 sec – the shortest period of regular variations known, except for pulsars and compact X-ray objects – corresponds to the highly magnetic white dwarf's axial rotation.