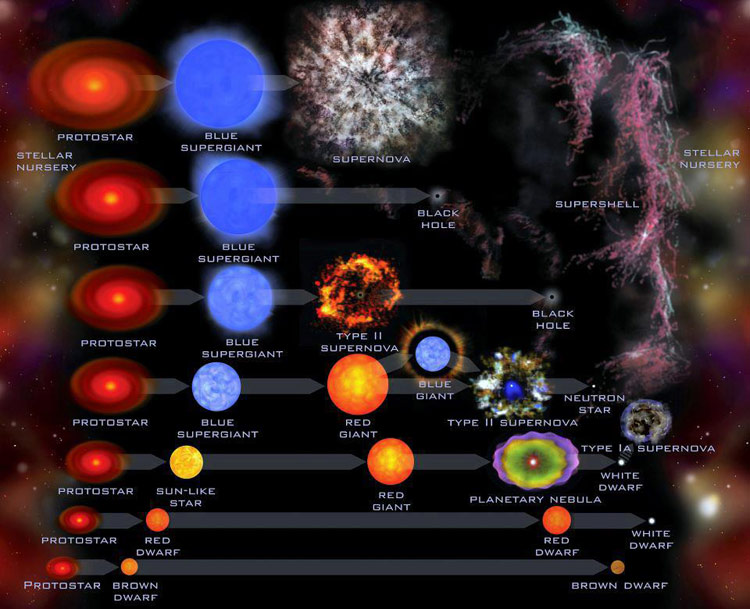 The evolution of stars of different kinds. Credit: SETI Institute. 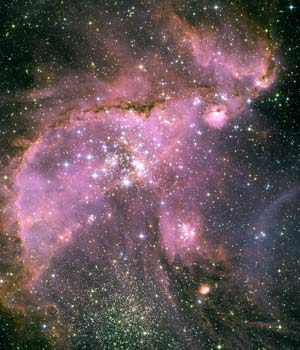 The star cluster NGC 346 and its surrounding star-formation region. Located 210,000 light-years away in the Small Magellanic Cloud, the cluster is one of the most dynamic and intricately detailed star-forming regions known. Image: Hubble Space Telescope.

The life history of a star, from birth to death, the timescale and details of which depend crucially on the star's initial mass (see stars, masses) and, to a far lesser extent, on its composition. A star's lifetime is roughly proportional to 1/M 2.5, where M is the stellar mass, so that, for example, doubling the mass cuts the star's lifetime by a factor of more than 5, while increasing the mass 10-fold drops the life expectancy by a factor of about 300. Stellar evolution is shown succinctly by the Hertzsprung-Russell diagram (HR diagram).

Stars form in giant molecular clouds within localized regions that have undergone gravitational collapse. Dense concentrations of gas arise in which gravitational potential energy is converted into light and heat. A young protostar becomes hot enough (2,000 to 3,000 K) to glow red, but is obscured by a thick cocoon of gas and dust that allows only infrared and microwaves to pass through. At some point, the central temperature of the protostar climbs high enough for deuterium, a heavier isotope of hydrogen, to undergo fusion, which temporarily halts the object's gravitational contraction. When the deuterium is used up, the embryonic star continues its gravitational infall as a pre-main-sequence object, until its core temperature reaches the point at which normal hydrogen burning can take place and the star joins the main sequence. Here it remains, in a stable condition, for about 90% of its lifetime. When the star exhausts its central hydrogen supply, the core, deprived of outward radiation pressure, begins to shrink; meanwhile fusion starts in a shell around the core. This phase is relatively rapid and sees the star's outer layers swell and cool, through the subgiant stage, to yield a red giant, or, in the case of a very massive star, a red supergiant.

A star's subsequent career continues to hinge on its mass. For stars heavier than one solar mass, the hydrogen-burning shell eats its way outward leaving more and more helium behind. As the helium piles up, the core gains massive and so contracts, becoming denser and hotter. Eventually, the core becomes so dense that the electrons inside it enter the state of an electron degenerate gas – a condition in which they resist further contraction or expansion. As the hydrogen shell continues to burn, the degenerate core grows hotter, until, at a temperature of about 100 million K, helium begins to fuse into carbon by the triple-alpha process. The energy released by this process raises the core's temperature still further. Under normal circumstances, this would cause the core to expand and cool. But, as the core is degenerate, there is no expansion and the temperature rise goes up unchecked. Higher temperature means a faster triple-alpha rate, which produces more energy, which raises the temperature further, and so it goes on. When the temperature of the core reaches 300 million K, a nearly explosive consumption of the helium takes place in the so-called the helium flash. In this remarkable event, which lasts only a few minutes, the star generates energy at 100 times the rate of the rest of the Galaxy put together. However, this huge surge of energy never reaches the surface but instead goes into removing the degeneracy of the electrons and expanding the core. For stars more than 2 solar masses, the triple-alpha process starts before the electrons become degenerate and so there is no helium flash – just a gradual shift to a core-helium-burning.

After helium-burning begins, either explosively or gradually, the star has two sources of energy: hydrogen fusion in a shell around the core and helium fusion in the core itself. Helium fuses to give carbon, and some of this carbon combines with helium to yield oxygen. At the same times as the core of the star becomes rich in carbon and oxygen nuclei, the surface temperature climbs until the star reaches a part of the HR diagram known as the horizontal branch. Stars with masses greater than or equal to one solar mass become smaller and hotter at a constant luminosity. They evolve to the horizontal branch by moving across the HR diagram at constant brightness – low mass stars with about 10 times the luminosity of the Sun, high mass stars (10 solar masses) with about 200 solar luminosities. Notice that as they evolve, HB stars cross the instability strip. For a short time, high mass stars will be Cepheid variables and low mass stars will be RR Lyrae stars.

After existing as horizontal branch stars for a few million years, the helium in the core of the star is exhausted (now being mostly carbon and oxygen nuclei) and a helium burning shell develops below the hydrogen burning shell. The electrons and nuclei in the core again become degenerate and the star expands and cools to become an asymptotic giant branch star. Most of the energy comes from the hydrogen burning shell, the helium burning shell is small at this time. However, the hydrogen shell is dumping helium ash onto the helium shell. After some time, enough helium is built up so that the helium shell undergoes an explosive event called a thermal pulse. This pulse is barely noticed at the surface of the star, but it serves to increase the mass of the carbon/oxygen core so that the size and luminosity of the star gradually increases with time. As the star climbs the asymptotic giant branch, a stellar wind develops in the star's envelope that blows the outer layers into space. In this wind, dust particles (important for interstellar clouds and proto-solar systems) are formed from carbon material dredged up from the core by convective currents. During this time, a thick dust shell blocks the visible light from the star such that even though it is 10,000 brighter than the Sun, it is only seen in the infrared. The stellar wind causes mass loss for AGB stars. This loss is around 10–4 solar mass per year, which means that in 10,000 yr the typical star will dissolve, leaving the central, hot core (the central star in a planetary nebula). If the star is larger than 8 solar masses, then the core continues to heat. Carbon and oxygen fuse to form neon, then magnesium, then silicon. All forming into burning shells surrounding an iron ash core. Iron is unusual in that it is extremely stable and resistant to fusion. The temperature of an iron core can reach 3 billion degrees. When the iron core reaches a critical mass, it collapses, suddenly, to become a neutron star or possibly even a black hole, while the outer layers are violently expelled in a supernova explosion.

As an asymptotic giant branch star becomes larger and more luminous, the rate at which is loses mass also increases. For stars less than 8 solar masses, a strong stellar wind develops and the outer layers of the star are removed to expose the hot degenerate core. As the gas is expelled and the core is visible, the color of the star becomes much bluer and moves to the left in the HR diagram at constant luminosity. Only a few 1,000 yr are needed for the temperature of a star to grow to 30,000 K. At this temperature, the star begins to emit large quantities of ultraviolet radiation. This UV radiation is capable of ionizing the hydrogen shell of matter that escaped from the star during the AGB phase. This shell of ionized hydrogen glows deep red as a planetary nebula. In the center of the planetary nebula is the remnant core, which gradually cools to become a white dwarf. Since the white dwarf has no further source of energy, it simply cools over many billions of years and fades to a solid, inert lump – a black dwarf.

Material lost by stars, whether in the form of stellar winds, planetary nebulae, or supernovae is returned to the interstellar medium to begin the process of star formation and evolution all over again. Moreover, as it is only within the interior of stars that heavy elements such as carbon and oxygen are formed, this dissemination and recycling of star matter is crucial to the development of life as we know it.