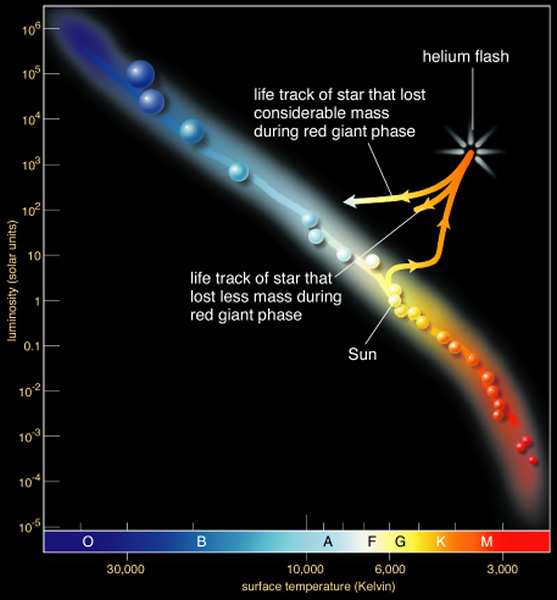 The point on the Hertzsprung-Russell diagram where the helium flash occurs.

The helium flash is the onset of runaway helium burning in the core of a low-mass star (such as the Sun).

The helium flash can only occur when the helium core is less than the 1.4-solar-mass Chandrasekhar limit and thus it is restricted to fairly low-mass stars.

The helium shell flash is one of a series of helium burning episodes in the thin helium shell that surrounds the dormant carbon core of an asymptotic giant branch star; the helium burning shell does not generate energy at a constant rate but instead produces energy primarily in short flashes. During a flash, the region just outside the helium-burning shell becomes unstable to convection; the resultant mixing probably leads to the s-process as well as to the upward movement of carbon produced by helium burning. The overheating from a flash also causes an expansion of the star's upper layers, followed by a collapse, leading to large-scale pulsations.

A final helium flash object is an evolved star that, in descending the white dwarf cooling track, undergoes a final thermal pulse when its helium shell ignites causing it to expand rapidly to high luminosity and become a born-again planetary nebula. This phase of stellar evolution is extremely short, lasting only a few decades to a few centuries and would rarely be observed. A handful of final helium flash object candidates have been identified, including Sakurai's Object, FG Sagittae, and V605 Aquilae.