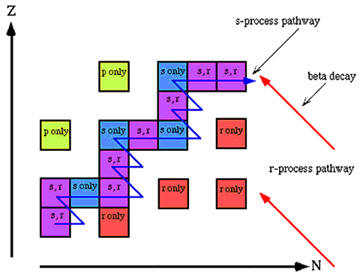 The s-process is a type of nuclear reaction, believed to take place inside massive stars on the asymptotic giant branch, in which elements heavier than copper are formed by the slow ("s") absorption of neutrons by atomic nuclei. The capture of neutrons occurs on time scales of thousands of years – long enough to enable unstable nuclei to decay via the emission of a beta particle before absorbing another neutron. This contrasts with the r-process, which is thought to operate in supernovae and occur over time scales of seconds. Prominent s-process elements include barium, zirconium, yttrium, and lanthanum.

Since the s-process starts with existing iron-group nuclei, it is only expected to take place in second-generation stars that have collapsed out of the residue of previous supernova explosions. A flux of neutrons is required, and it is most likely that these neutrons come from various reactions in the helium-burning region of a red giant. The seed isotope Z, A, from the iron region absorbs a neutron, changing from A to A + 1. If the new isotope is stable, it can absorb another neutron, going to A + 2. If it is unstable, it is assumed that the neutron capture rate is low enough that the nuclide has plenty of time to decay to Z + 1 by beta emission before the next capture. The same neutron-absorption process is then repeated for Z + 1. Thus, the nuclides produced lie in the "valley of beta stability" of the chart of the nuclides.