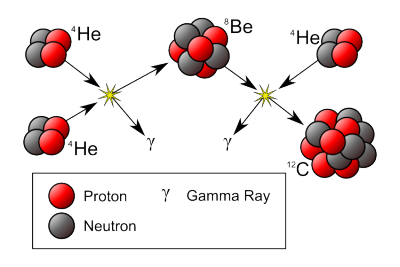 The triple-alpha process is a chain of nuclear fusion reactions, also known as the Salpeter process after the Austrian-American astrophysicist Edwin Salpeter (1924–) who first identified it, by which helium is converted into carbon. The triple-alpha process is the main source of energy production in red giants and red supergiants in which the core temperature has reached at least 100 million K. Two nuclei of helium (alpha particles) collide, fuse, and form a nucleus of beryllium. During a third collision between beryllium and helium, carbon is formed. Successive collisions build oxygen and neon.