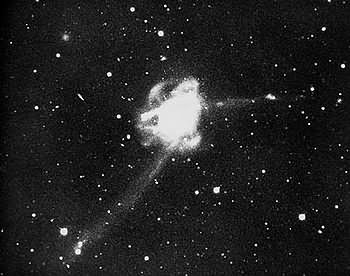 The Atoms for Peace Galaxy (NGC 7252) is a peculiar elliptical galaxy, about 300 million light-years away in the constellation Aquarius, which is thought to be the product of a merger between two disk galaxies that took place about one billion years ago. Its nickname comes from its prominent loop-like structure, made of stars, that resembles a schematic diagram of an electron orbiting an atomic nucleus. (In Dec 1953, President Eisenhower made his "Atoms for Peace" speech to foster peaceful applications of nuclear energy.)

The central region of NGC 7252 is home to more than 500 ultra-luminous clusters, which appear as bluish knots of light, mostly 50 to 500 million years old, and each typically about 60 light-years across. These unusual, young-looking globular clusters are the most obvious fruits of the suspected galaxy merger, originating in the infall of gas and subsequent burst of star formation that the merger triggered. Their discovery provides an important key to understanding how all globular clusters form in ellipticals and also how giant ellipticals originate. The globular clusters found in NGC 7252 are thought to resemble the progenitors of similar clusters that orbit the Milky Way Galaxy. Since globular clusters normally contain ancient red giants, they provide a fossil record of the formation and evolution of galaxies. Globular clusters contain about one million stars each, arranged in a tight, spherical swarm and are generally found to be about 15 billion years old. However, the ultra-luminous clusters found in NGC 7252 contain hot bluish stars. Because these blue stars are short-lived, the clusters in NGC 7252 are estimated to be mostly 50 to 500 million years old. During the past decade, the hypothesis that spiral galaxies can collide and merge to form elliptical galaxies has become increasingly popular. One argument against this theory is that elliptical galaxies have more globular clusters than expected if disk galaxies were simply combined, since disk galaxies have relatively few clusters. However, this problem goes away if, when disk galaxies collide, new globular clusters can be manufactured. A small disk-like structure at the heart of NGC 7252 also supports the motion that giant ellipticals grow out of spiral mergers. The pinwheel-shaped disk, deep inside Atoms for Peace, bears an uncanny resemblance to a face-on spiral galaxy, yet it is only 10,000 light-years across – about one-twentieth the size of the total galaxy. That this structure is a remnant of the collision between two galaxies is also supported by the fact that the mini-spiral is rotating in a direction opposite to the rest of the galaxy. Within in a few billion years, the gas in NGC 7252 will be exhausted and the galaxy will look like a normal elliptical galaxy with a small inner disk.