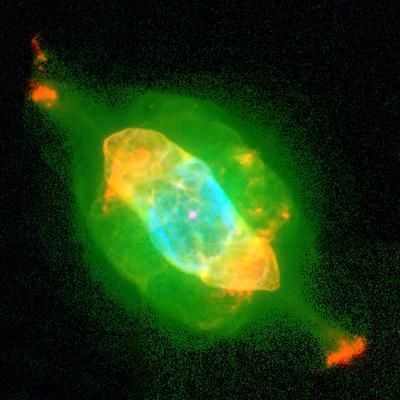 The Saturn Nebula is a planetary nebula in the constellation Aquarius. It was discovered by William Herschel in September 1782, and nicknamed by Lord Rosse in the 1840s, because of its vague resemblance to the sixth planet.

Like the Blinking Nebula, the Saturn Nebula has a bright central star at the center of a dark cavity bounded by a football-shaped rim of luminous gas. The cavity and its rim are trapped inside smoothly-distributed material in the shape of a barrel and comprised of the star's former outer layers. At larger distances, and lying along the long axis of the nebula, a pair of ansae, or "handles," each joined to the tips of the cavity by a long jet of material. The photo shown here was taken by the Hubble Space Telescope.