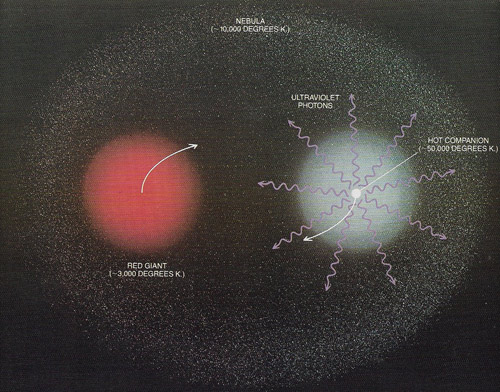 Model of a symbiotic star system illustrates how the cool red giant star is embedded in a nebula whose atoms have been ionized (stripped of one or more electrons) by the energetic radiation from the compact hot companion star. The nebula consists of gases expelled from the red giant in the form of a stellar wind. The radius of the giant star is at least 50 to 100 times the radius of the Sun, so that its tenuous outer envelope is close to its small circling companion. The ionization of the nebula accounts for the many emission lines that characterize the spectra of symbiotic systems in the visible and ultraviolet regions of the spectrum. This version of the model depicts the symbiotic system in a quiescent state, a condition in which the emission lines in the spectrum have narrow, sharply defined profiles. 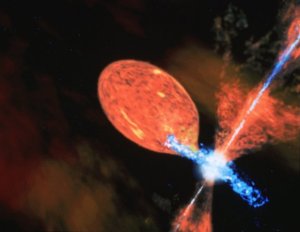 A symbiotic star is a binary star system, the combined spectrum of which includes a molecular absorption band component, typically involving the presence of TiO bands, and an emission line component, such as emission lines of ions of higher ionization such as He II4686 Å and [O III]5007 Å. The components of a symbiotic star are a red giant and a small hot star, such as a white dwarf, surrounded by nebulosity.

Symbiotic stars are likely progenitors of bipolar planetary nebulae and they could make up some of the systems that later explode as Type Ia supernovae, spectacular explosions visible across cosmological distances.

Spectra of symbiotic stars suggest that there are three regions which emit radiation: the individual stars themselves and the nebulosity that surrounds them both. The nebulosity is thought to originate from the red giant, which is in the process of losing mass quite rapidly either through a stellar wind or through pulsation. The symbiotic phase represents a late stage in stellar evolution and a brief span in the life of the binary. Because of the short timescale involved, symbiotic stars are rare objects. Only a few hundred are known, one of the closest of which is CH Cygni. The majority of these are in our own galaxy, the Milky Way, although some are extragalactic, including one in the Draco Dwarf Galaxy, and a number in the Small Magellanic Cloud and Large Magellanic Cloud, which are satellite galaxies of our own.