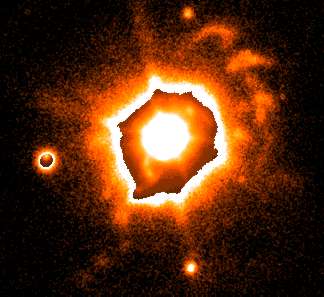 The nebula around CH Cygni imaged by the 2.6m Nordic Optical Telescope on La Palma. Credit: Villaver, Corradi, and Mampaso. 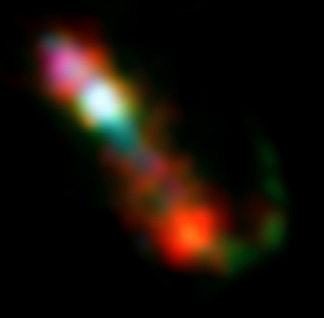 CH Cygni is the closest and one of the most unusual known symbiotic stars; it lies in the constellation Cygnus, 2° south-southwest of Iota Cygni at a distance from the Sun of about 870 light-years. CH Cygni has been seen to range in brightness from magnitude 5.6 (visible to the naked eye) to 10.5. It is a system in which a white dwarf draws materials from the stellar wind of a companion red giant. The material from the wind enters a hot accretion disk around the white dwarf before crashing onto the surface of the star.

CH Cygni was originally thought to be a semi-regular variable, with a 90- to 100-day period and an amplitude of about one magnitude. However, in 1976 a hot blue continuum appeared in the spectrum, together with emission lines of hydrogen, helium, calcium, and iron; at the same time, CH Cygni grew brighter than it had ever been seen before and showed rapid fluctuations, especially in ultraviolet light. This superposition of two distinct spectra – a hot blue continuum with emission lines on top of a late-type absorption spectrum – led to CH Cygni's reclassification as a symbiotic star. It is thought to consist of an M-type red giant and a much hotter, smaller white dwarf, in a 2.07-year orbit. The pair are embedded in a dusty cloud of material that has been pulled off the giant by the hot dwarf; there also appears to be a third star in a wider, 14.5-year orbit. CH Cygni remained in its "blue outburst" state from 1976 to 1986, then faded abruptly by about 2.5 magnitudes. Subsequently it continued to fade, reaching an all-time low magnitude of 10.5 in 1997. However, the decline was not smooth and there were semi-periodic oscillations with each minimum fainter than the last. Since 1997, CH Cygni has varied between magnitudes 7.7 to 9.1.

In 1984, radio emission was detected in the CH Cygni system, further studies of which revealed a bipolar jet-like structure.


Close-up of a CH Cygni jet

The image to the right shows a recent powerful jet in CH Cygni, caught in action by the Chandra X-ray Observatory (at X-ray wavelengths), Hubble Space Telescope (in visible light), and Very Large Array (at radio wavelengths). The material in the jet is moving with a speed of over three million mph and is powered by material spinning in the accretion disk around the white dwarf. The curved appearance of the jet, shown in the optical by the green arc in the lower right part of the image, suggests that the direction of the jet rotates. This precession may be caused by wobbling of the accretion disk, in a manner similar to a spinning top. Clumps in the outer jet, seen in X-rays, visible light, and radio waves, provide evidence for powerful mass ejections by the jet in the past, and for interactions with shells of gas formed by the red giant. The jet can be seen as close as 20 astronomical units (AU) from the binary system, where one AU corresponds to the average distance from the Earth to the Sun. The jet extends out to distances as large as 750 AU from the binary, which is about 20 times the distance between the Sun and Pluto.

The shape of the jet in CH Cyg shows striking parallels with jets seen in very different astrophysical contexts, such as young stars or supermassive black holes located at the centers of galaxies. Because of its proximity it may be used as a small-scale model to study jet formation and propagation in much more complex and distant systems.

In a biological setting, symbiosis is defined as the "living together of unlike organisms," and describes close and long-term interactions between different species. In this sense, the astrophysical usage is apt because white dwarfs and red giants are very different stars. A red giant is extremely large and bright, with a relatively low temperature, while a white dwarf is small and faint with a high temperature.

Symbiosis is usually beneficial or essential to the survival of at least one of the species in the system, for example bees and flowers, birds and rhinos and clownfish and anemones. In the astrophysical context of symbiotic systems, the survival of the hot disk around the white dwarf, where the jet originates, depends on the wind of the red giant. The power, mass, and the speed of the jet are closely related to the white dwarf environment including the disk. Once formed, the jet disrupts and shapes the extended envelope and environment of the red giant, as the latter evolves toward the end point of its life as a planetary nebula. However, in some cases, if the white dwarf gains too much mass from the red giant, it may end up being completely destroyed in a Type Ia supernova explosion.

A paper describing the new observations of CH Cyg was published in the February 20, 2010 issue of the Astrophysical Journal Letters and was led by Margarita Karovska from the Harvard-Smithsonian Center for Astrophysics (CfA). The coauthors are Terrance Gaetz from CfA, Christopher Carilli from the National Radio Astronomy Observatory, Warren Hack from Space Telescope Science Institute, and John Raymond and Nicholas Lee, both from CfA.

Note: The text and image for this section came from the Chandra Observatory website.