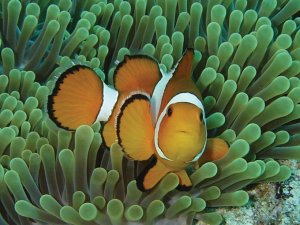 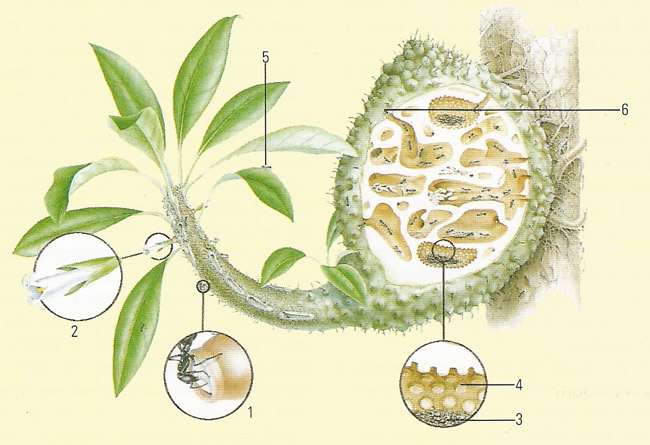 Iridomyrmex ants and the Myrmecodia (ant plant) benefit from a symbiotic relationship. The ants feed on the sugary nectar of the plant. This is produced in nectaries (1), which develop at the base of the flower (2) after the petals and sepals have fallen off. The plant benefits from the vital minerals in the ants' defecation and waste materials (3), which it absorbs through the warty inner surface of the chambers (4). The ant plant is epiphytic, growing from trees in upland rainforests, where the soils are often lacking in nutrients. The mineral nutrients provided by the ants supplement the plant's poor diet. As the plant grows, its stem enlarges and develops cavities, which are invaded by the ants (5). These chambers do not interconnect, but have separate passages to the outside (6). A complete ant colony soon becomes established in the plant. 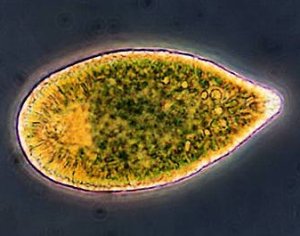 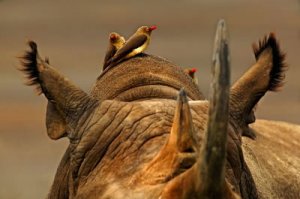 Oxpeckers on a rhino's back. Image credit: WWF/Martin Harvey.

Symbiosis is the intimate living together of two organisms (called symbionts) of different species, for mutual or one-sided benefit. A good example of mutually beneficial symbiosis is the clownfish and the sea anemone. The clownfish can come in contact with the stinging tentacles of the sea anemone and not be harmed by them. At the same time, it receives protection from its enemies. The clownfish feeds the anemone by gathering nutrients and also leaving nutritional waste on the tentacles.

Many close associations exist in nature between quite unrelated living things. These may be between one plant and another, between a plant and an animal, or between two animals. The closeness of the association and the amount of give and take varies considerably. For instance, one partner may be so specialized that it is unable to exist on its own. Such is the case with many parasites. Tapeworms, for example, have no gut, so that they rely on their host to provide them with already digested food. Their relationship is a parasitic one – the tapeworm gives nothing to its host, and the latter may suffer considerable harm. Other associations may be looser – the sharing of a burrow, for example – and are said to be commensal. There are some very close associations between two organisms to their mutual benefit, which is called symbiosis.

One of the best known examples of symbiosis is that between the hermit crab and a sea anemone (e.g. , Adamsia). The anemone is often found attached to the shell in which the hermit crab lives. In their long history hermit crabs have developed the habit of sheltering within the empty shells of mollusks such as periwinkles and whelks. The hind portion of the has lost its hard covering and would otherwise be unprotected. As the crab gets bigger it outgrows its shelter and so has to find a new one. Often, a sea anemone attaches itself to the crab's shelter and it may envelop part of the crab's own shell as well. The growth of the crab and anemone keep pace with each other and the crab has no need to change its shell – more and more of its is sheltered by the anemone. As the crab moves about in search of food the anemone is brought into contact with a greater supply of food and the crab is protected by the anemone's stinging cells.

Many protozoans and single-celled algae live symbiotically with animals. Symbiotic plant cells are particularly common in planktonic-shelled protozoans – the foraminiferans and radiolarians – and in corals and other many-celled animals in tropical seas. It is possible that such associations have arisen because of the relative lack of minerals in the surface waters of warmer seas. Radiolarians have a frothy layer of cytoplasm outside the main mass of cytoplasm. Within the froth are embedded a number of tiny plants. These obtain shelter and have a ready supply of food in the form of the waste materials that the radiolarians produce. The oxygen that the plant cells release is available to the radiolarians and possible food substances as well. By using up the waste materials alone the plants render a useful service to the animals.

Many cnidarians and some flatworms have green algae (Zoochlorellae) living in their tissues. Hydra viridis, a cnidarian commonly found in freshwater, owes its green color to the many algal cells in its tissues. Corals (particularly reef corals) and sea anemones also have symbionts in their tissues.

A most interesting association is between the green alga Carteria and the flatworm Convoluta. When very young, the latter lives the life of a normal flatworm, feeding in the same way as other free-living forms. However, at an early stage it obtains a stock of symbionts, loses its gut and becomes completely dependent on them for its food supply. The symbionts obtain a supply of carbon dioxide and nitrogen-containing waste materials. They are also brought out into the light by the animal at appropriate times. The flatworm is supplied with oxygen and food and has its waste materials removed.

Symbiotic microorganisms – bacteria, fungi (yeasts), and protozoans – play an important role in the lives of many insects. They may be harbored in the gut or in special cells (mycetocytes) which are often grouped together to form organs called mycetomes.

One wood-eating termite grows only when the wood on which it feeds harbors a fungus population. Some wood-eating cockroaches have protozoans and bacteria in their gut and certain scarab beetle larvae house bacteria that digest cellulose.

Some biting lice and several sucking lice have mycetocytes containing bacteria, and many bugs have mycetomes that contain bacteria and yeasts. It has been shown that in some female beetles the symbionts are smeared on to the eggs from special sacs as these are laid. The beetle grubs become infected after hatching when they eat the egg shells.

Mammals harbor vast populations of bacteria in their stomachs and intestines. Ruminants such as cows and sheep have special chambers in the stomach in which the bacteria live, feeding on cellulose in the grass on which their hosts feed. By their activities the bacteria produce simple organic acids (e.g. acetic acid) from the cellulose, which the cows and sheep can absorb through their gut wall. Bacteria also produce vitamins (e.g. B12) in the gut. This may be the only supply of some of these essential nutrients. In rabbits and horses the symbiotic bacteria are harbored in chambers or ceca of the large intestine.

There are several well-known associations between birds and large mammals. Cattle egrets, for example, are often see in the company of buffalo and elephants. They flourish on the insects kicked up by the feet of these animals. The egrets appear to be aware of approaching danger more quickly than their hosts are and it is likely that their actions in this respect serve to warn their larger companions.

A familiar wildlife scene in Africa is that of oxpeckers running over the backs of hippopotami and rhinoceroses. These birds rid their partners of injurious and annoying pests and in doing so obtain a ready supply of food.

In the plant world there are many examples of symbiosis: root-nodule bacteria infect the roots of legumes (e.g. clover); some orchids and heathers form close associations and fungi (called mycorrhizas) as do forest trees such as beech and pine.

Lichens are peculiar plants formed by the union of a fungus and an alga. They play an important part in the formation of soils, being the first to colonize rocks. The substances that they produce dissolve the rocks away, forming the fine particles that are washed down by rain to form soils. They consist of algal cells embedded in a weft of fungus threads. The algae that occur within lichens are very similar to free-living forms but the fungi are unable to lead an independent existence. The alga is protected and supplied with moisture while the fungus absorbs the food materials made photosynthetically by the alga.