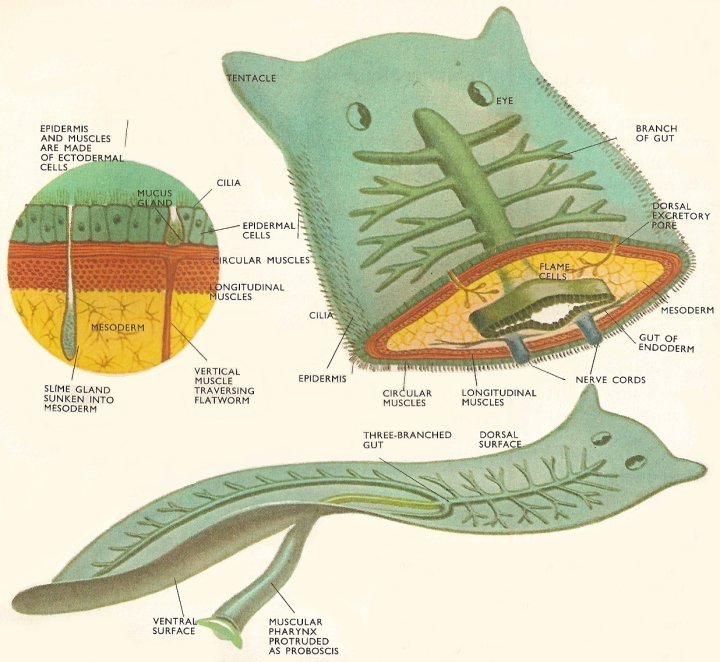 Cross-section through a turbellarian flatworm showing internal structure. The gut is made of endoderm, the skin and muscles of ectoderm. The rest is mesoderm. Below: pharynx of flatworm extended. Insert: detailed structure of the ectoderm. 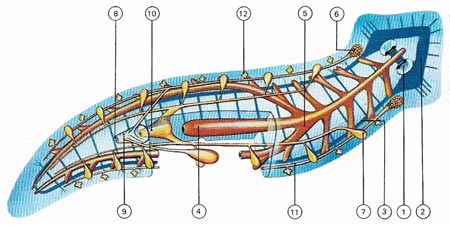 The turbellarian flatworm has sensory, reproductive and digestive systems. The head has eyes (1) over a brain (2) from which run a pair of nerve cords (3). A pharynx that can turn inside out (4) opens into a branching gut (5). All species are hermaphrodite with ovaries (6) and testes (7). A genital pore (8) leads to the genital chamber (9) in which lies the penis (10). On passing down the oviducts (11) the eggs are fed by yolk glands (12). 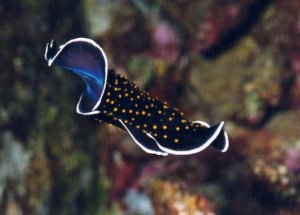 The free-living flatworm named Procerodes littoralis grows to a length of 2 cm (0.75 in) and lives on the rocks of the upper and middle seashore. It belongs to a group called the turbellaria, most of which are aquatic, and many marine. The ribbon-like body – which ensures that oxygen and waste products have only a short distance to diffuse – is clearly advantageous for an animal with no circulatory system.

The flatworms have remarkable powers of regeneration. Cut into three, each segment will form a whole new worm. Indeed, free-living flatworms often divide asexually by pulling themselves in two. The adaptability of the group is further demonstrated by starving them; when food is in short supply they not only shrink in size, but actually digest their own organs. Later, when times are better, the missing organs are regenerated. 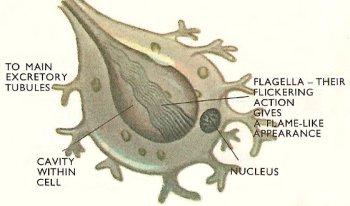 Excretory system of a flatworm.

A flatworm is a member of the invertebrate phylum Platyhelminthes, of which about 25,000 species are known. Some are free-living, but many are parasitic (for example, tapeworms and flukes). The body is simple and bilaterally symmetrical, with one opening to the intestine. Many are hermaphroditic (with both male and female sex organs) and practice self-fertilization.

Flatworms have bodies made of three layers, an outer ectoderm, an inner endoderm, and in between the mesoderm. There is a definite head and the body usually tapers towards the rear. The characteristic flattening of the bodies gives the group its common name.

Unlike in the case of annelid worms (e.g., the earthworm) there is no division of the body into numerous segments. Nor does the middle layer divide to form an internal cavity – the coelom (annelid worms and all higher animals, including mammals, have coeloms).

Flatworms belong to one of four subsidiary groups. Those found in streams, ponds, moist soils, and the sea are the turbellarians. They are free-living, that is they move about looking for food. The other three groups – the Tremotada (flukes), Cestoda (tapeworms), and Monogenea – are all parasitic. The trematodes (e.g., liver-fluke) live in or on a variety of hosts but still retain their own gut. The cestodes (tapeworms) are so specialized that they have lost their gut; food is absorbed directly through the surface of their bodies from the surroundings in which they live. Monogenea are close relatives of the tapeworms but have a simple digestive system; they are found most commonly on the skin, fins, and gills of fish.

Most turbellarians grow to no more than a centimeter or two in length (although the largest grow up to 60 cm). Yet despite their smallness they are voracious carnivores, eating any small animals – usually worms and crustaceans – that they can find.

The arrangement of the gut is variable among the turbellarians. The most common flatworms are the triclads (three-branched flatworms). The mouth is situated somewhere on the under (ventral) surface. Inside, the gut branches into three – one branch runs forwards to the head and the other two pass backwards. A very common triclad is Dendrocoleum lacteum.

For organisms too large to be ingested whole, turbellarians have a special device. Just inside the mouth, the first part of the gut (the pharynx) is very muscular, and can actually be protruded as a proboscis beyond the mouth. It becomes attached to the victim and a backward and forward pumping motion, together with the action of digestive enzymes, breaks the food into more manageable lumps which are then taken into the gut.

Deprived of food for long periods, turbellarians will actually begin to digest themselves. They shrink in size as eggs, reproductive organs, muscles and parts of the gut are consumed. On normal feeding they return to their full size, regenerating all the lost organs.

The ectodermal cells covering the surface of turbellarians are ciliated – that is, hair-like structures, called cilia, project outward into the water. The beating of the cilia gives rise to a gliding motion with which the turbellarians may move across the substratum or underneath the surface of a film of water. Another, more rapid, mode of locomotion is by muscular contraction – seen as a series of ripples passing from the front of the animal to the rear.

Two long nerve cords, near the ventral surface, run the length of the body. They give off branches which divide further. So, just as in Hydra and other cnidarians, there is a network of nerve fibers throughout the body. But flatworms are more advanced. At the anterior (head) end, the two nerves cords are connected by numerous cross-fibers. Nerve cells are present along the fibers and the knot of nervous matter represents a rudimentary brain.

Turbellarians are made aware of their surroundings by a number of sense organs. Eyes are situated on the top (dorsal) surface of the head. Dendrocoleum lacteum, for example, has two but some species have as many as 32. The eyes have no lens but there is a cup-shaped retina of special, heavily pigmented cells.

Cells designed to detect chemicals in the water (chemosensory receptors) and change in flow of water (rheostatic sensors) are distributed over the whole surface of the body. Dendrocoleum lacteum and a number of other turbellarians have a pair of small protruding tentacles at their front ends. The tentacles are particularly well equipped with sensory cells and are well supplied with nerve fibers; undoubtedly they provide information about food and changes in the water as the animal advances.

The reproductive system of turbellarians is exceedingly complex – in strong contrast to the simplicity of other systems. To begin with, turbellarians have both female and male organs within the one creature – they are hermaphrodites. Also present are a number of very elaborate structures for preventing the worms from fertilizing themselves. After mating, the ova (eggs) of each animal become fertilized with the sperm of the partner. The eggs are then laid in cocoons. Dendrocoleum lacteum lays eggs all the year round but some species do so only seasonally. Each egg has its own yolk supply and this provides the developing animal with nourishment. The animals that hatch out are identical to their parents, though of course, much smaller.

Nitrogen-containing excretory products diffuse in solution through the body tissue into a series of branching tubules – the water vessels. There are two main tubules, one on either side of the body, near the upper surface. These have excretory pores opening onto the upper surface. Subsidiary branches of the tubules terminate in flame cells – hollowed-out structures containing a number of hair-like flagella. The flickering movement of the flagella keeps the fluid in the tubules continually circulating. No doubt this speeds up the loss of excretory products and also helps eliminate excess water passing into the animal's body by osmosis.