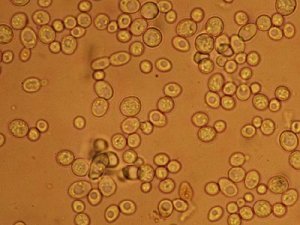 Cells of the yeast Saccharomyces cerevisiae, some budding.

Yeast is a unicellular fungus that belongs to the class Hemiascomycetae of the phylum Ascomycota. Yeasts may occur as single cells or as chains of cells. They reproduce asexually by budding and sexually by producing ascospores. Yeasts of the genus Saccharomyces (Brewer's yeast) ferments sugars and are used in the baking and brewing industries.

When their food is in short supply, many yeasts can form spores which lie dormant. A fresh food supply causes the spores to germinate and start a new colony.

Yeast spores are very light and easily blown about by the wind. Large numbers are found in the air, in the soil, and on plants and fruits, and in water.

Brewer's yeast grows best where there is a plentiful supply of carbohydrate present, particularly when the carbohydrate is in the form of sugar. This is why the maltose-rich wort in the brewer's vat enables the yeast to grow so rapidly. Yeast, like animals, uses sugar as a source of energy, for although it doesn't move, it needs large amounts of energy during growth and reproduction.

In both yeast and animals, as energy is produced the sugar is converted into pyruvic acid. In animals this acid is oxidized to carbon dioxide and water by the oxygen in the air that is breathed, and in the process more energy is obtained. In yeast, however, this process does not take place. The pyruvic acid is merely converted, without further oxidation, into carbon dioxide and alcohol.

The process by which the yeast changes the sugar into carbon dioxide and alcohol is called fermentation. This process is catalyzed by an enzyme complex called zymase, which was first isolated by the German chemist Eduard Buchner. The presence of beers and wines, the fizziness in bottled beer and champagne, and the lightness of dough as it rises are all the result of fermentation.


Yeast in beer- and wine-making

The yeast species Saccharomyces cerevisiae (see photo) is used both in the brewing of beer and the leavening of bread. In beer-making the sugar for the yeast is obtained from barley malt. The sugar, maltose, is merely two glucose molecules joined together, and makes excellent food for the growing yeast. As the yeast grows the sugar is converted to carbon dioxide, which escapes, and alcohol, which is left in the beer. Fermentation ceases when the yeast has used up all the sugar.

Wine is made using the species Saccharomyces ellipsoideus because it converts the grape sugar into the alcohol of the wine. This yeast is not generally cultivated, but as it lives in the soil it finds its way naturally on to the fruit and thus into the wine vats.