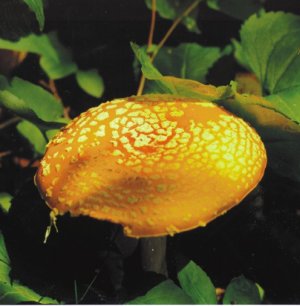 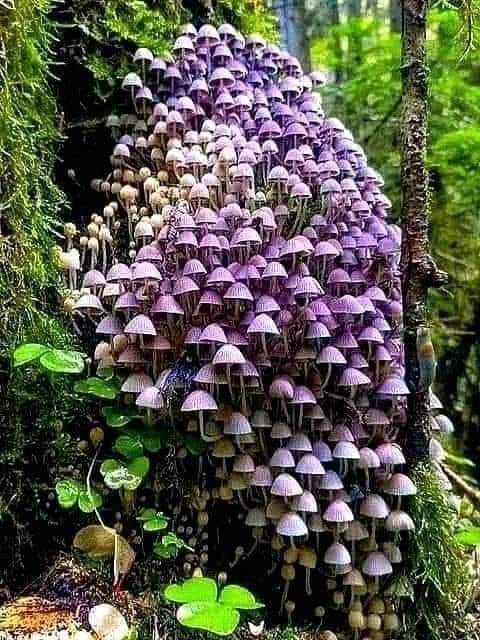 Fig 2. Fairy Inkcap (Coprinellus disseminatus), also known as "trooping crumble cap", is a species of agaric fungus in the family Psathyrellaceae. Unlike most other coprinoid mushrooms, the Fairy Inkcap does not dissolve into black ink (deliquesce) in maturity 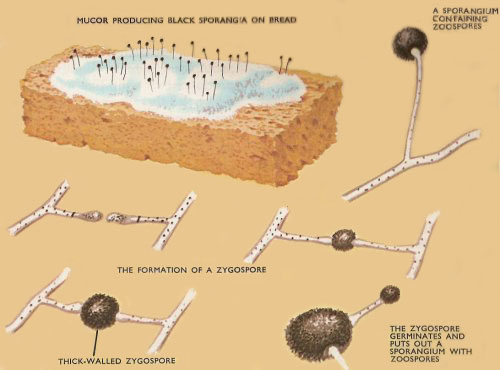 Fig 3. Mucor grows on many materials such as stale bread where it forms a fluffy mass of hyphae. The non-sexual spore-containing organs (sporangia) are black and release airborne spores. When hyphae fuse they form zygospores which are very resistant. The zygospore germinates and produces a sporangium. 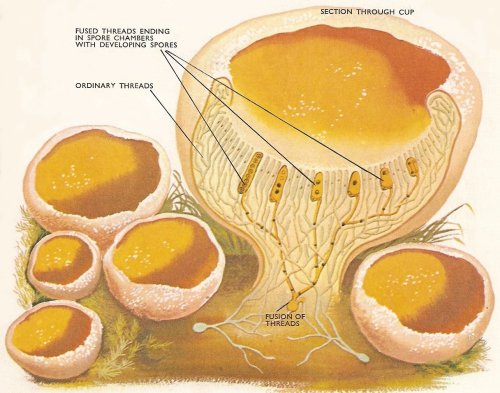 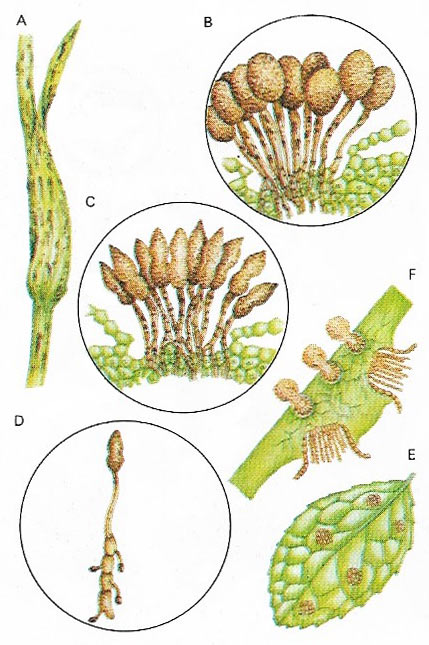 Fig 5. Stem rust, also known as black rust, is caused by Puccinia graminis, a fungus that dides its complex life cycle between two hosts. In early summer, spores (B) on an infected wheat plant (A) are dispersed to infect other wheat. Later, new resting spores (C) are produced. These survive the winter on the wheat stalk and germinate (D) in the spring, producing spores to infect the barberry plant (E), on which a form of sexual reproduction (F) produces another wheat infector.

Fungi are eukaryotic, usually multicellular, non-motile, heterotrophic organisms, which as a group comprise the kingdom Fungi. More than 100,000 species are known.

Fungi can exist either as single cells or make up a multicellular body known as a mycelium, which consists of filaments known as hyphae (Fig 3). Most fungal cells have more than one nucleus and have cell walls made of chitin.

Fungi are mainly found living in damp conditions on land. Lacking chlorophyll they cannot manufacture organic material from the carbon dioxide and water in their surroundings as plants do. Many live in complete darkness since they do not depend on sunlight. Fungi rely for food on ready-made organic substances which are absorbed through the hyphae from the material on which the fungus grows. In this respect fungi resemble animals, which also need ready-made food. The hyphae often release digestive juices that liquefy the food material.

Many fungi are parasites, absorbing food from living organisms. Those which exist on dead material – leaves, twigs, leather, etc – are called saprophytes. They play an important part in the economy of nature because they break down dead organisms and release material for use by plants.

As food and water are absorbed, the hyphae of the fungus increase in length and frequently branch. Growth is far less complicated than in higher plants because fungi have no special tissues. The hyphae are simple tubular structures whose walls consist of various types of cellulose and nitrogen-containing compounds. They contain cytoplasm, nuclei, and droplets of oil which act as a food reserve. Pigments occur in the colored varieties. The hyphae are sometimes divided by cross-walls into cells, each with one or two nuclei.

Fungi reproduce by spores. The principal criteria used in their classification are the nature of the spores produced and the presence or absence of cross-walls within the hyphae. Five phyla of fungi are recognized: Ascomycota, Basidiomycota, Chytridiomycota, Glomeromycota, and Zygomycota. Basidiomycota includes the most familiar of fungi, the mushrooms and toadstools.

Commonly known as chytrids, these fungi produce zoospores (tiny, single-celled bodies produced in the swollen tips of hyphae) that are capable of moving on their own through liquid by simple flagella. Members of the phylum Chytridiomycota are the most primitive of fungi. In older classifications, they were placed in the class Phycomycetes under the subdivision Myxomycophyta.

Fungi in this phylum reproduce sexually with meiospores called zygospores and asexually with sporangiospores. A familiar example is Mucor, the common pin mold of bread, leather, etc. The spores of Mucor are distributed by wind or insects. There are no distinct male and female structures but not all the hyphae are alike. There are two physiologically different strains (called plus and minus) and when the two meet they form reproductive structures. The occurrence of two physiologically different strains is called heterothallism and is found in most of the higher fungi.

In Mucor, the tips of side-threads are partitioned off and those of opposite strains join together. The nuclei join in pairs and a hard wall forms around them. This is the zygospore. When the zygospore germinates, after meiosis, it puts out a single thread which bears zoospores at its tip. These are distributed and form new threads. Most of the life of these fungi is spent in the haploid state (i.e. the nuclei have only one set of chromosomes). Only the sexual zygospores have two sets. This is in contrast to the higher plants and animals whose body cells have two sets of chromosomes. This is because in the higher organisms the reduction of the chromosome number takes place just before sex-cells are formed.

Also known as the arbuscular mycorrhizal fungi, members of this phylum form an ancient group with fossil remains dating back 400 million years. Only one species has been observed forming zygospores; all other species only reproduce asexually.

The hyphae of these fungi are divided into cells each with, normally, a single nucleus. Many are important parasites but the most obvious are the brightly colored cup-fungi, such as Peziza (Fig 4), which live on dead logs and the like. The sexual spores are formed inside special cells called asci, which normally occur in fruiting bodies made up of masses of tightly packed hyphae. The fruiting bodies are often brightly colored.

There are usually two different strains of hyphae which will produce fruiting bodies only when they meet. The hyphae join but the nuclei remain separate. The hyphae continue to grow and produce more cells, each with two nuclei. These hyphae and branches of the original ones form the fruiting body. The spore-chambers (asci) develop at the tips of the hyphae which have two nuclei. In a cell, at or near the tip, the nuclei fuse and then divide into eight. Each new nucleus takes on some cytoplasm and forms a spore. The spores are released when the spore-chamber opens. Spores of both strains are produced, and later grow into new hyphae.

To this phylum belong the most familiar fungi – the mushrooms and toadstools. Their early life is much like that of the previous group – they exist as fine branching hyphae on dead leaves, manure, etc. When threads of opposite type meet, they again produce fruiting bodies of closely matted hyphae, some of which have two nuclei in their cells. The fruiting body of the mushroom develops underground as a small knot of hyphae. Its structure is almost fully formed before it appears above ground, and then, by absorbing large amounts of water, it grows up into the air and opens out into the typical umbrella-shape. On the underside of the cap there are many radiating gills which bear the spores. The hyphae bear club-shaped cells at the tip and in these cells (the basidia) the two nuclei fuse. They then divide by meiosis and the four new nuclei pass into four tiny swellings on the outer end of the cell. These are the tiny spores (basidiospores). They fall when ripe and are distributed by wind.

In the cultivated mushroom, only two spores are formed at the tip of each cell so that each spore has two nuclei. There is no need for two different threads to meet before producing fruiting bodies in this case, because the threads already have two nuclei.

Some other fungi of this group have numerous pores on the underside instead of gills. The spores are produced on the linings of the pores in these cases. Many of the bracket fungi on trees are of this type. Black rust, also known as stem rust or cereal, is also a member of this phylum (Fig 5).