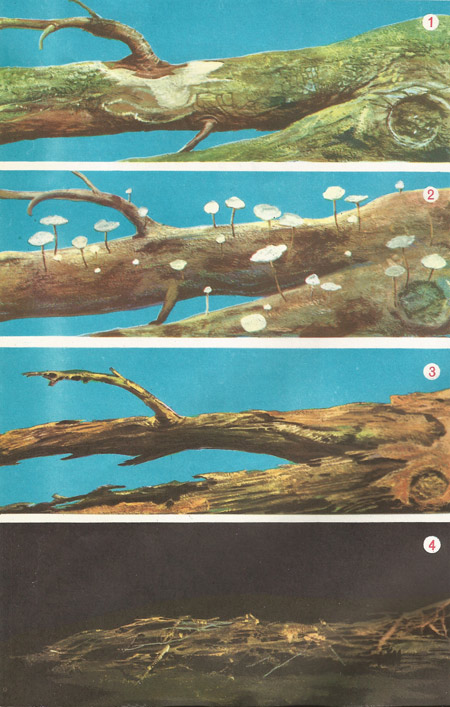 Decay of a tree trunk.

A saprophyte is a plant that absorbs food from dead or decaying organic matter instead of carrying out photosynthesis. Saprophytes include most fungi, e.g., the yeasts that ferment sugars and molds that decay fruit, and some flowering plants.

Chlorophyll is the substance that gives green plants their color, and which enables them to manufacture their own food. The chlorophyll absorbs certain rays of sunlight and uses the energy gained from these rays to join up, chemically, water and the gas carbon dioxide. By this means sugar and starch are produced, and the plant has manufactured its own food from simple chemical substances.

All animals are dependent, directly or indirectly, on this process for their food, for animals feed either on plants or on other animals. There are also larger numbers of plants which, since they are without chlorophyll, must also feed on other plants or animals. These are classified into two groups according to whether they feed on dead or living material; the former are called saprophytes, the latter parasites. Very few parasitic plants live on animals, but quite a large number feed on other living plants.

Saprophytic plants play an important role as they consume and clear away all the branches and leaves which fall from the trees, and which would otherwise cover the land.


Stages in the decay of a tree trunk

Let us look more closely at the way in which these 'natural scavengers' clear away the trees and branches and leaves that fall to the ground. We will follow the stages in the decomposition of a tree left lying on the ground. Refer to the accompanying illustrations

1. First the bark becomes covered by mosses and lichens which penetrate and weaken it and cause it to disintegrate and fall off the trunk.

2. The bare wood is now exposed and spores of fungi from the air settle on it. They quickly germinate and invade the wood and, by means of enzymes, cause chemical reactions to take place. In this way food is provided for the invading organisms and the wood becomes soft and decays. Some of the fungi appear on the surface as spreading colored patches, others are like little mushrooms, some occur in still other forms.<

3. As the wood decays, myriads of bacteria and fungi find it suitable for their growth. They transform the cellulose and lignin of the wood into sugars and break down the nitrogenous compounds into simpler substances on which they feed.

4. The fungi send innumerable filaments or threads, called hyphae, into the wood. These hyphae are of the same nature as those which we see if we examine mildew with a lens, and through them the fungi absorb the liquid food produced by the action of their enzymes. Some fungi have the strange property of making the wood luminous in the dark.

The wood of the trunk slowly crumbles away and is converted into inorganic compounds which are absorbed into the soil.

The bacteria and fungi which live and feed in this way are called saprophytes (from the Greek sapron: a corpse) because they live on dead organic matter. In doing so they perform a service that is essential to life on earth, changing complex organic substances into simple mineral compounds and returning these to the soil so that they can be used again by green plants in the process of building up their tissues.