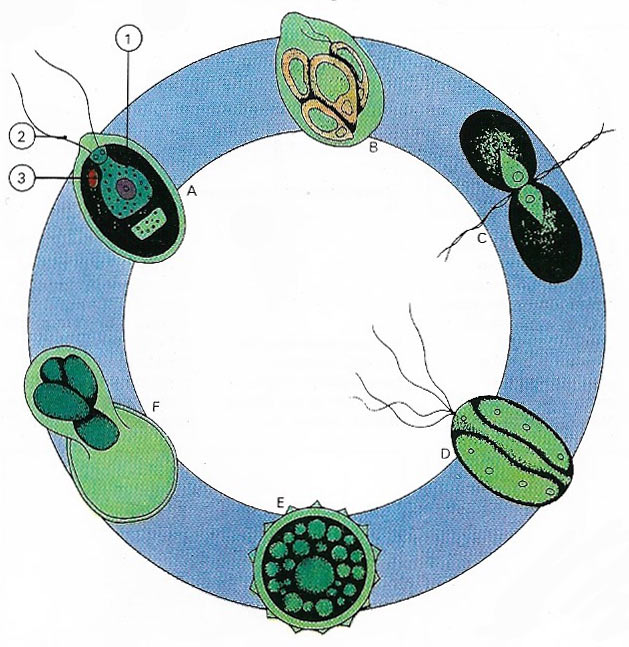 Fig 1. The green alga Chalmydomonas (A) has a cup-shaped plastid (1), two equal flagella (2), and a red eyespot (3). It usually reproduces by division of the cell contents (B) into 4 to 16 motile cells (zoospores) that then disperse . In sexual reproduction the divided products (gametes) fuse together in pairs (C,D) after release, forming a non-motile resting stage (E) that produces four zoospores (F) when conditions are favorable. The organism lives mostly in freshwater, especially stagnant pools, where it swims about in response to the light. The red eye spot is sensitive to light and determines the direction of movement.

Green algae are plant-like organisms that belong to the phylum Chlorophycota of the kingdom Protista, a large group of marine and freshwater algae. Chlorophytes have several features that make them more like green plants than ordinary algae: they have cup-shaped chloroplasts (Fig 1) that contain photosynthetic pigments similar to those in higher plants (chlorophylls a and b, as well as the secondary pigments carotenes, lutein, and zeaxanthin) and have a green color; they have cell walls made of cellulose; and they store food in the form of starch. Some produce cells with flagella at some stage in their lives. Green algae range in size from microscopic, single-cell types (some with flagella) to large complex seaweeds.

The sea lettuce or green laver (Ulva lactuca) is a familiar seaweed (A) that is occasionally eaten. Acetabularia (B) is one of a group of lime-encrusted green algae from tropical and subtropical seas. It resembles a delicate toadstool and has been widely used by scientists because the single-celled stalk, up to 5 cm (2 in) high, can be cut into two living parts with and without a nucleus.