A combined image of the Helix Nebula using infrared data from the Spitzer Space Telescope for the central nebula, rendered in green (wavelengths of 3.6 to 4.5 microns) and red (8 to 24 microns), with WISE data covering the outer areas in green (3.4 to 4.5 microns) and red (12 to 22 microns), and ultraviolet data from GALEX in blue (0.15 to 2.3 microns)in blue. Image credit: NASA/JPL-Caltech. 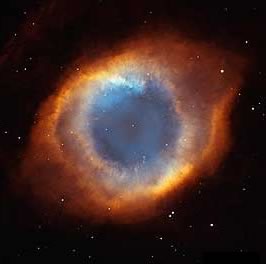 The Helix Nebula in visible light. 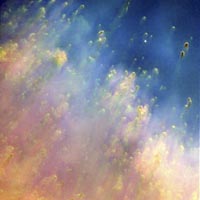 The Helix Nebula (NGC 7293) is one of the nearest planetary nebulae to the Sun. The Helix Nebula lies in the constellation Aquarius and was discovered by Karl Ludwig Harding before 1824. In apparent size (including an outer halo) it is almost as big as the full Moon.

Observations by the Hubble Space Telescope of the inner edge of the Helix's main ring have resolved fine details associated with the long-known radial structures. These details include thousands of comet-like knots, the heads of which are larger than our solar system. Hot, fast moving shells of nebular gas overrunning cooler, denser, slower shells ejected by the star during an earlier expansion may have produce these droplet-like condensations as the two shells intermixed and fragmented.1 An intriguing, if somewhat remote, possibility is that instead of dissipating over time, these objects might eventually collapse to form Pluto-like bodies. If so, small icy worlds created near the end of a star's life would be numerous in our galaxy.


Multispectral view of the Helix

The image at the top of this page, published in 2012, combines observations of the Helix made by three different spaceborne instruments across a broad span of wavelengths from infrared to ultraviolet.

The intense ultraviolet radiation from the central white dwarf heats the expelled layers of gas in the surrounding nebula, which consequently glow strongly in the infrared. Data from GALEX shows the UV radiation throughout the nebula in blue. The Spitzer Space Telescope captures the infrared coming from dust and gas in yellow. Meanwhile WISE (Wide-field Infrared Survey Explorer) shows an extended portion of the the nebula not revealed by Spitzer.

The white dwarf is a bright pinprick right at the center of the nebula. The brighter purple circle in the center is the combined UV and IR glow of a dusty disk circling the white dwarf (the disk itself is too small to be resolved). This dust was most likely kicked up by comets that survived the death of their star.