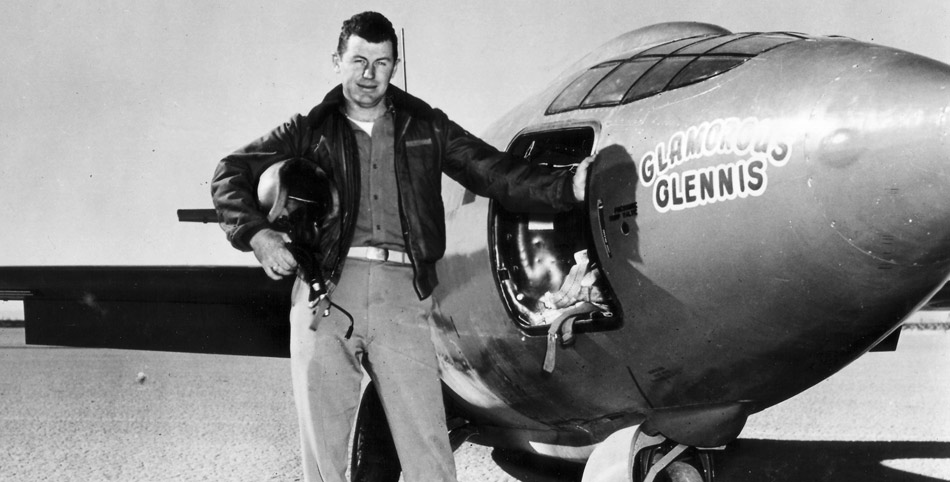 Charles 'Chuck' Yeager standing next to his Bell X-1 nicknamed 'Glamorous Glennis' after his wife. 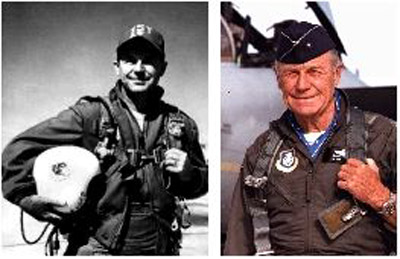 Charles "Chuck" Yeager was a United States Air Force test pilot who, on October 14, 1947, piloted the Bell X-1 rocket plane on the first supersonic powered flight – an event he almost missed. The Sunday before his record-breaking mission, while horseback riding, Yeager hit a fence that had been closed across a road and cracked two ribs. Instead of informing the flight surgeon and risking being grounded, Yeager and a friend decided he could fly the plane but would have difficulty reaching over to lock the cockpit door. His friend cut off a piece of broomstick, which Yeager used to push the locking mechanism closed before taking off on his historic flight. Upon his return, only a few were able to congratulate him immediately on his achievement. The X-1 project was classified at the time, and his speed record was not made public until June 1948 (see below for further details of this story). In later years, Yeager served in several Air Force positions, retiring as a brigadier general.

The name of Charles "Chuck" Yeager is synonymous with the Bell X-1 – the first of the X planes – and the smashing of the sound barrier. But he wasn't the first to take the controls of the flying bullet. That honor went to Bell Aircraft's chief test pilot Jack Woolams. Although only in his late twenties, Woolams had already, in September 1942, become the first person to fly a fighter non-stop from coast to coast across the United States and, the following summer, had cracked the world altitude record for an aircraft, reaching 47,600 ft.

Woolams was a consummate prankster. During the War, he was at the Materiel Command Flight Test Base (later part of Edwards Air Force Base), California, putting the new Bell XP-59A through its paces. This was America's first military jet and a hush-hush project, so that when it was towed from its hangar to the run-up area, a fake propeller was attached to the nose to disguise its true nature. Still, Woolams couldn't resist the opportunity for a practical joke, even if it meant breaching security. During a daylight XP-59A mission in the fall of 1943, he noticed a P-38 Lightning from a nearby training unit flying in the same area. Taking off his flight helmet, he slipped on a furry mask and short-brimmed hat, and eased the jet alongside the P-38. The Lightning's pilot must have got the shock of his life when he saw the sleek, propeller-less plane, barely 20 ft away, being flown by what appeared to be a gorilla in a derby hat – waving a cigar.

In Jan 1946 Woolams found himself in a very different situation. He was 8,000 ft up in a B-29 climbing down a ladder and into the tiny cockpit of the X-1 nestled partly inside the bomber's dark underbelly. At 28,000 ft the countdown to launch began and, at zero, the small rocket plane was released into the dazzling light of day for its maiden flight – an unpowered cruise back to Pinecastle Army Airfield near Orlando, Florida. Nine more such outings followed before the first X-1 was taken back to Bell Aircraft for some modifications. A new series of tests was to begin in September 1946, but they would be flown by another pilot.

At the end of August, Woolams was flying over Lake Ontario in a P-39 Airacobra – a single-seater that had been one of the most successful American fighter aircraft of the War. He was preparing for the upcoming National Air Races in Cleveland, and nudging the P-39 up towards 400 mph. Suddenly and inexplicably it went out of control, plunging into the water and breaking up on impact. Woolams body was recovered four days later.

The X-1 tests resumed, but by the following summer the Air Force had grown impatient with the progress of the project. Bell Aircraft were running what the brass considered to be too slow of a build-up to the assault on Mach 1 – the speed of sound. Bell's contract for testing was cancelled and responsibility for going through the sound barrier handed to the Army Air Force Flight Test Division (the "Army" part of that title was soon to be dropped as the US Air Force became a separate service in September 1947). The new chief test pilot was Charles "Chuck" Yeager, a World War II veteran blessed with astonishingly acute 20/10 vision which once enabled him to shoot a deer at 600 yards. During the War, he was the first pilot in his P-51 Mustang group to "ace in a day", accounting for five enemy planes in a single mission. He was also one of the few allied pilots to shoot down a German jet, a Messerschmitt Me 262.

After a couple of months flying the X-1, Yeager was nudging it very close to the sound barrier. At speeds of Mach 0.95 – 95% of the speed of sound – the plane was getting buffeted a lot by the turbulent air piling up around it. No one quite knew what was going to happen when the aircraft finally went supersonic because there were no useful wind tunnel data. Models had been put in wind tunnels and subjected to air moving at supersonic speeds but the shock that formed on the models at about Mach 0.9 would simply bounce off the walls and block the air flow. So what happened between about 10% below the speed of sound and 10 percent above of it was more or less a mystery.

The term "sound barrier" first came into use during World War II. Fighter pilots who made high speed dives noticed several irregularities as flying speeds approached the speed of sound: aerodynamic drag increased markedly, much more than normally associated with increased speed, while lift and maneuverability decreased in a similarly unusual way. Pilots at the time mistakenly thought that these effects meant that supersonic flight was impossible; that somehow planes would never travel faster than the speed of sound.

Tuesday, October 14, 1947 was the date earmarked for Yeager's next X-1 flight. Although there was no set goal of trying to go supersonic on that day, a sense of anticipation was growing among everyone involved with the project given how close the plane had been flirting with the barrier. But on the Saturday before the flight, Yeager and his wife Glennis were out horseback riding when Yeager hit a fence that had been closed across a road, was thrown off, and ended up cracking two ribs. Rather than let the flight surgeon know about his injury and risk being grounded, Yeager and his buddy Jack Ridley decided to try a work-around. Flying the plane wasn't going to be a problem. The snag was that, with his injured right side Yeager wouldn't be able the close the cockpit door with his right arm. The solution: Ridley sawed off a 10-in length of broomstick so that Yeager, once in the pilot's seat, would have enough leverage to push the locking mechanism closed.

With the B-29 at 8,000 ft, Yeager climbed down into the 250 mph ice-cold slipstream, bending double and climbing painfully into the dark little cockpit. A few minutes later came the drop into the blinding light of day, and then a wild ride into the history books. Yeager fired off all four engine chambers, climbed to 35,000 ft, turned off two of the chambers, and continued to climb to 42,000 ft before leveling off and reigniting the third chamber. With the machmeter showing Mach 0.92 he experienced the usual buffeting; at Mach 0.97 the needle suddenly jumped off the scale (the maximum value marked on it was 1.0). At first, Yeager thought the instrument was faulty and radioed "it's gone kinda screwy on me." On the ground, a loud bang was heard – not the X-1 breaking up but breaking through the sound barrier. Suddenly the buffeting stopped and Yeager took the rocket-plane up to Mach 1.07 (about 650 mph) before gliding back to base and the congratulations of a select handful of people who knew about the achievement. The X-1 project was classified and news that the sound barrier had been crossed wasn't made public until June of the following year.

With supersonic flight now a reality and fears about the sound barrier blown away, there was a major push to move on to much higher speeds. The research was important to the field of aerospace as a whole and the development of new, high-performance fighter planes in particular.

Even as work began on new X-planes, such as the Bell X-2 rocket-plane, with its swept (angled-back) wings, and the incredibly slender, jet-powered Douglas X-3 Stiletto, the original X-1, which eventually reached 1,000 mph, evolved into a number of variants. One of these, the X-1A, was piloted by Yeager, on December 12, 1953, to another speed record – Mach 2.4. But on this occasion events threatened to get seriously out of hand and only Yeager's experience managed to save the day.

The X-1A was about seven feet longer than the old X-1 and carried almost twice as much fuel so that it could accelerate for much longer. After three flights, Yeager had already cranked the new plane up to Mach 1.9. The fourth flight started well with a good drop and all four rocket chambers firing, powering the plane on a steep climb through 60,000 feet, 70,000 ft, and on up to 80,000 ft. By now the X-1A was passing Mach 2.3, gaining another 30 mph every second. Suddenly, the plane started to yaw, its nose drifting to one side. Yeager responded by pushing the rudder to try to get the nose back in line but it had no effect. The yaw got worse, and then the outside wing began to rise. The situation quickly became desperate. The aircraft rolled until it was flying upside-down, pitched up. The stress on the cockpit canopy was too great and it split open, exposing Yeager to the cold, thin outside air, and causing his pressure suit to inflate.

The X-1A was rolling ferociously, as if it were the most vicious corkscrew roller coaster you could imagine, rotating twice around a second, and putting Yeager through a withering 9g. Ground and sky flashed by in dizzy succession but, crucially, Yeager stayed conscious and alert to what was happening with the plane. As the X-1A ran out of fuel it slowed and the rolling stopped. Yeager saw the sky "below" him and the horizon going round and round, and realized he was in an inverted, flat spin, pulling negative g's – not ideal, but at least he knew what to do about it. Test pilots are as used to spinning planes as test drivers are to making handbrake turns, and they know exactly how to make them stop: set the aileron (the hinged flap on the trailing edge of each wing) with the spin direction, apply the rudder, then fall out of the spin. It worked. The whole ordeal, from the time the aircraft started to yaw at 80,000 ft until Yeager popped out of the spin at 25,000 feet lasted a mere 51 sec, but contained enough stomach-churning action and danger to last most ordinary mortals a lifetime. Throughout it all Yeager had had to contend with a smashed canopy, exposure to the sub-Arctic cold of high altitude, and a bulked-out, inflated pressure suit. But now he was as good as home. Looking around he spotted his landing site, Rogers Dry Lake, about 50 mi away and glided on back to base. The X-1A had made its first and only excursion above Mach 2.