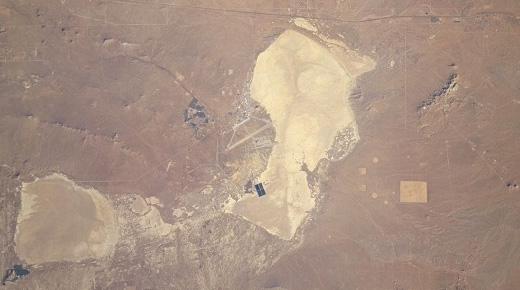 Edwards Air Force Base is a major American military installation, covering 122,000 ha, situated in Kern, Los Angeles, and San Bernardino counties, in southern California, northeast of Lancaster and approximately 160 km (100 miles) north of the city of Los Angeles. Established in 1933, it was originally known as the Muroc Army Air Field. In 1950, it was renamed in memory of test pilot Glen Edwards, who died while testing the Northrop YB-49. The base is strategically situated next to Rogers Lake, an endorheic desert salt pan, the hard playa surface of which provides a natural extension to Edwards' runways. This large landing area, combined with excellent year-round weather, make the base an ideal site for flight testing.

Edwards AFB is one of the largest air force bases in the United States and has the world's longest runway. The base is home to the Air Force Flight Test Cente (see below)r, which researches and develops aerospace weapons and rocket-propulsion systems, and NASA's Dryden Flight Research Center. It is a proving ground for military aircraft and has been the landing point for several Space Shuttle missions, including the first nighttime Shuttle landing by Challenger on Sep 5, 1983.