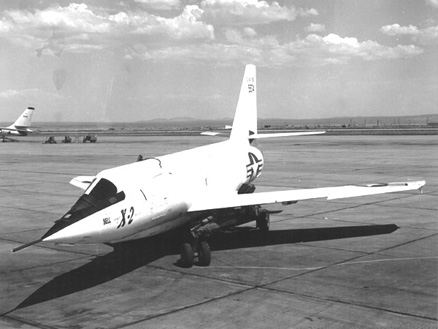 The X-2 was a swept-wing, rocket plane designed to explore flight at high supersonic speeds and be the first aircraft to take man to the edge of space. The Bell X-2 was made of stainless steel and copper-nickel alloy, and powered by a two-chamber Curtiss-Wright XLR25 throttleable rocket engine variable thrust rating from 2,500 to 15,000 lb.

The X-2 was equipped with an escape capsule for the pilot. In an emergency, the entire nose assembly would jettison and deploy a stabilizing parachute. Once at a safe altitude, the pilot would then manually open the canopy and bail out. Although the Air Force approved the final escape system design, NACA representatives were concerned that it might prove dangerous to use.

Following launch from a B-50 bomber, Bell test pilot Jean "Skip" Ziegler completed the first unpowered glide flight on June 27, 1952. This vehicle was subsequently lost in an explosion during a captive flight in 1953. Lt. Col. Frank "Pete" Everest completed the first powered flight in a second X-2 on November 18, 1955, and on his ninth and final flight in late July 1956 established a new speed record of Mach 2.87. At high speeds, Everest reported that the X-2's controls were only marginally effective, and data from his flights combined with simulation and wind tunnel studies suggested that the aircraft would encounter very severe stability problems as it approached Mach 3.

A pair of young test pilots, Captains Iven Kincheloe and Milburn "Mel" Apt, were assigned the job of further expanding the envelope and, on September 7, 1956, Kincheloe became the first pilot ever to climb above 100,000 ft (30,500 m), reaching a peak altitude of 38,500 m. Twenty days later, Apt made his first X-2 flight under instructions to follow the "optimum maximum energy flight path" and avoid any rapid maneuvers above Mach 2.7. Flying a precise profile, he became the first human to exceed Mach 3, accelerating to Mach 3.2 (3,369 km/h) at 20,000 m. The flight had been flawless to this point but, shortly after reaching top speed, Apt attempted a banking turn while still above Mach 3. The X-2 tumbled violently out of control and he found himself struggling with the same problem of "inertia coupling" which Yeager had experienced in the X-1 nearly three years before. Unlike Yeager, however, Apt was unable to recover and both he and the aircraft were lost.

While the X-2 had supplied valuable research data on high-speed aerodynamic heat buildup and extreme high-altitude flight conditions, this tragic event ended the program before NACA could start detailed research with the plane. Finding answers to many of the riddles of high-Mach flight had to be postponed until the arrival, three years later, of the most ambitious of all rocket planes: the X-15.