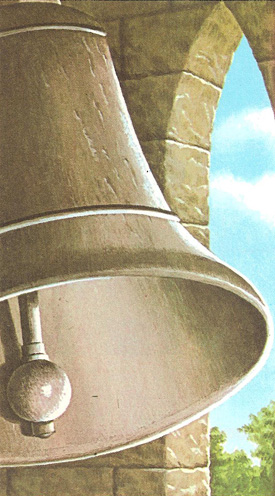 The vibrations of a bell are transmitted through the air and picked up by our ears as sound. 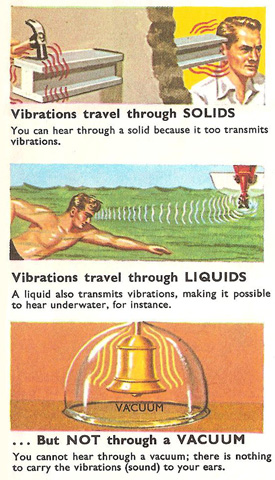 Sound can travel through solids and liquids but not a vacuum. 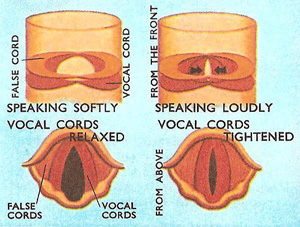 The tolling of a bell is simply the vibrations caused by a clapper striking a metal shell. The vibrations of the bell push and pull the surrounding air which in turn pushes and pulls the air beyond. In this way the bell's vibrations are transferred to our ears as sound.

Everything that makes a sound is vibrating and everything that vibrates is making a sound. The speed at which at object vibrates governs the pitch or note of the sound it makes. If you wedge a saw into a cut in a piece of of wood, bend the blade and then let it go, the saw-blade will vibrate. If the saw is only a little way in the cut it will vibrate slowly with a low purring note. But the farther it is pushed into the cut (in other words the smaller the length that is allowed to vibrate) the faster the vibrations will become and the higher the pitch of the sound it will make.

An ordinary garden swing in motion is really vibrating, yet you can't hear the sound it is making, and few people can hear the high-pitched squeak of a bat. The reason for this is that some vibrations are too slow and some are too fast for us to hear as sounds. Put another ways, some notes are too low and others are too high for the human ear to detect. On average the range of notes we can hear as sounds varies from about 20 vibrations per second (a low growl) to about 20,000 vibrations per second (a high-pitched piercing whine).

A vibrating saw is 'beating' the air and it is the vibrations of the air which are picked up by our ears. But you can hear through a solid too. If a metal girder jutted out at both sides of a thick wall and somebody struck it at one end with a hammer, you could hear the sound at the other side of the wall by placing your ear to the girder. The vibrations would be transmitted through the metal to your ear. You can also hear through a liquid. An underwater swimmer can hear the vibrations of a nearby outboard motor quite clearly. The one thing you can't hear through is a vacuum. If the air is drawn out of a jar containing a suspended bell and the bell is 'rung' you can't hear any sound from it. The bell is vibrating normally but there is no air for it to beat. In other words, there is no way of transmitting its vibrations to your ears.

The human voice results fro air being passed over the vocal cords when we breathe out, causing them to vibrate. These vibrations are transmitted through the air and picked up by our ears as sound. The pitch of the sound is governed by the tautness of the cords, since this varies the speed at which they vibrate.