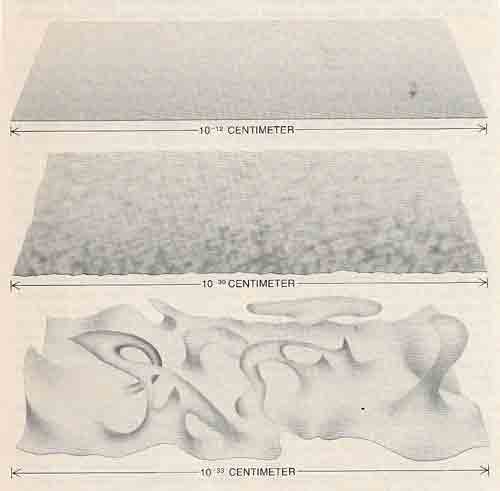 Quantum vacuum, as envisaged by John Archibald Wheel in 1957, becomes increasingly chaotic as one inspects smaller regions of space. At the scale of the atomic nucleus (top) space looks very smooth. At dimensions of 10-30 centimeter (middle) a certain roughness in the geometry begins to appear. At the scale of the Planck length, 1,000 times smaller still (bottom), the curvature and the topology of space are continually undergoing violent fluctuations.

A vacuum, in the simplest sense, is empty space. However, since a vacuum, either natural or artificial, is never completely empty, the term needs a modifier. Thus scientists speak of a hard vacuum (one that approximates the vacuum of outer space), a quantum vacuum, and so forth. The best human-made vacuums contain less than 100,000 molecules per cubic centimeter.

Evangelista Torricelli is credited with developing the first artificial vacuum in the mercury barometer. In 1650 the German physicist Otto von Guericke invented the first vacuum pump.

'Empty space' when seen at the subatomic level is far from empty but instead seethes with energy, the rapid appearance and disappearance of all sorts of elementary particles, and fluctuations in the fabric of spacetime itself. It is the source of zero point energy which is seen as the potential basis for radically new forms of propulsion and "free energy" in the far future.

Vacuum energy density is the amount of energy per unit volume associated with empty space itself. Although the idea of empty space having a nonzero energy associated with it seems a strange one, this idea is at the root of the cosmological constant and inflationary cosmologies.

A central tenet of the physics of Aristotle is that the laws of nature do not permit a void – a space containing absolutely nothing. This principle came to be known as Aristotle's horror vacui (fear of emptiness) and is captured in the phrase "Nature abhors a vacuum".

According to Aristotle, the very notion of a void was nonsensical, because the term "void" seemed to be defined as an indefinable nothing. Semantics aside, Aristotle observed that all things in motion eventually come to a halt. Were there a void, said Aristotle, a thing in motion would remain so forever. Furthermore, in a void, objects would not be compelled to move or fall in any particular direction. This, of course, did not correspond to Aristotle's observations of the world, and so he concluded that the universe must be filled and that the motion of things are determined, in part, by their relative densities.

For these reasons (and others) Aristotle taught that the universe was filled with a medium that he called ether, which, in addition to the traditional four elements identified by Empedocles before him, comprised the five elements of the universe. This notion persisted through the Middle Ages and into the 17th century. It was among the chief reasons why atomism, which embraces the notion of a void, gained little traction. Around the 17th century, a more sophisticated (and vague) conception of this medium came to be referred to a phlogiston. However, in 1643, the Italian physicist Evangelista Torricelli proved fairly conclusively that a vacuum can indeed exist.