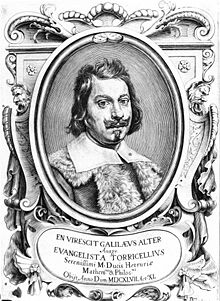 Torricelli experimenting with a colun of mercury.

Evangelista Torricelli was an Italian physicist and mathematician, and a one-time assistance of Galileo, who improved the telescope and microscope, and invented the (mercury) barometer (1643).

Torricelli was born in Piancaldoni in the Romagna, on Oct 15, 1608. He was brought up by an uncle who lived in Faenza and who put him under Jesuit tuition. When he was 20 he was sent to Rome, where he studied mathematics. Galileo's theories on force and motion caught his attention, and led to his writing a Trattato del Moto (about 1641), and to his being invited by Galileo (1641) to visit him; on the old philosopher's death, three months later, he was appointed mathematician to the grand-duke, and professor to the Florentine Academy. Here he resided till his death on Oct 25, 1647.

Torricelli's great discovery was the interpretation of the previously known fact that will rise in a suction-pump only to a height of about 32 ft – the idea that the column of fluid is sustained by the pressure on the open surface of fluid. The vacuum in the barometer was historically known as the Torricellian vacuum; and the barometer of this type is sometimes called the Torricellian tube.

Torricelli also effected the quadrature of the cycloid – in this he was anticipated by Roberval– and made other mathematical discoveries.


Torricelli and the mercury barometer

Galileo and Torricelli already knew that ordinary lift pumps would not raise water more than about 30 ft. The reason seems quite simple to us – the water is actually lifted by the pressure of the atmosphere acting on the water in the well trying to push it up the pipe. However, a column of water 30 ft or more in height is not a very convenient subject for experiments, and since it has to be contained in a metal pipe, observation and measurement of its height cannot easily be carried out. Torricelli realized that the weight of a column of mercury (13.6 times as dense as water) only 30 in high is equal to the weight of a column of water 34 ft high. So he suggested that, in the experiments which developed from his investigations into the working of pumps, mercury must be used instead of water. A glass tube, about 3 ft in length, was filled with mercury and turned upside down so that its open end was in a trough of mercury. The mercury level in the tube was seen to fall until its height was about 30 in. The weight of the 30-in column of mercury was being balanced by the weight of the atmosphere acting on the surface of the mercury in the open trough. Because the tube was sealed there was no air above the mercury to push down upon it. Torricelli concluded that the space above the column was a vacuum. This discovery caused an uproar because until that time people had followed the teaching of Aristotle who said that nature would not tolerate a vacuum.

Torricelli measured the height of the mercury column from day to day and concluded that it varied with the weather. His idea that this was tied up with air pressure was verified by young Blaise Pascal, who succeeded in showing that the column was shorter in rarefied mountain air. Since it could be used for measuring air pressures, Torricelli's mercury column was the first barometer.