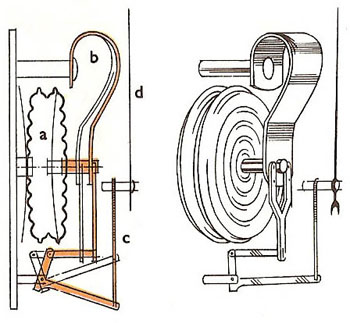 Fig 1. The aneroid barometer comprises a partially evacuated corrugated metal box (a), prevented from collapsing by a spring (b). The strain in this spring, proportional to the difference in pressures between the air inside and outside the box, is amplified by a train of levers (c) that operate a pointer (d) that moves over a calibrated scale. Aneroid barometers are convenient to use but require regular calibration against an accurate mercury barometer. 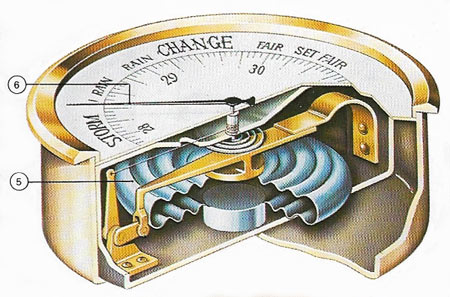 Fig 2. The aneroid barometer was invented in 1843. In this view, (5) is the evacuated sealed metal chamber and (6) is the pointer. 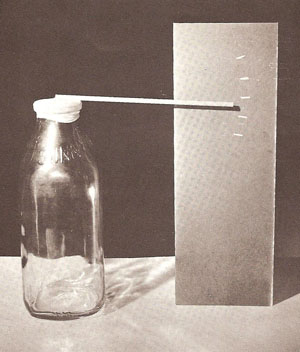 A barometer is an instrument for measuring air pressure used in weather forecasting and for determining altitude (Fig 1 and 2). Most commonly encountered is the aneroid barometer (see illustration to the right) in which the effect of the air in compressing an evacuated thin cylindrical corrugated metal box is amplified mechanically and read off on a scale or, in the barograph, used to draw a trace on a slowly rotating drum, thus giving a continuous record of the barometric pressure. The aneroid instrument is that used for aircraft altimeter.

The barograph is a recording barometer consisting of an aneroid barometer that has, instead of a pointer, a pen that continuously records atmospheric pressure on a paper chart wrapped round a revolving drum, usually driven by clockwork.

The earliest barometers, as invented by Torricelli in 1643, consisted simply of a glass tube about 800 mm long closed at one end and filled with mercury before being inverted over a pool of mercury. Air pressure acting on the surface of pool held up a column of mercury about 760 mm tall in the tube, a "Torricellian" vacuum appearing in the closed end of the tube. The height of the column was read as a measure of the pressure.

In the Fortin barometer, devised by Jean Fortin (1750–1831) in the early 1800s and still used for accurate scientific work, the lower mercury level can be finely adjusted and the column height is read off with the aid of a vernier scale.

A simple barometer can be made from a milk bottle or similar bottle (Fig 3). Cut the end from a round toy balloon. Then stretch this end smoothly over the mouth of the bottle and tie it in place. Next glue one end of a drinking straw to the center of the rubber cap. For a scale, mark a strip of cardboard with graduations and prop it up beside the straw.

Compare the position of the straw pointer from day to day. When the atmospheric pressure rises, it pushes the rubber cap in; when it falls, the greater pressure inside the bottle pushes the cap out. Always take your readings when the air is at the same temperature; otherwise they will be unreliable.