The Magdeburg Experiment: strong horses are unable to separate the closely-fitted halves of an evacuated sphere. 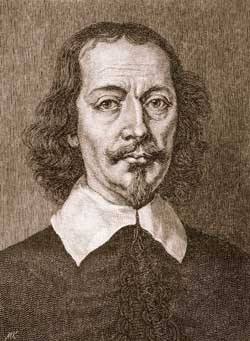 Otto von Guericke was a German physicist and Burgomaster of Magdeburg, credited with inventing the vacuum pump. His best-known experiment was the Magdeburg Experiment, conducted in 1654. Von Guericke took two large hollow hemispheres of copper and fitted them together so that they formed a single sphere. Then, with a machine of his own invention, he extracted the air from it, and showed that two 15-horse teams were insufficient to separate the halves. Von Guericke is also credited with inventing the first electric generator.

Thanks to von Guericke's experiment helped overturn a long-held belief. It had long been thought that many natural and physical phenomena (the wind, the movement and falling of bodies, and the raising of liquids by suction pumps) were caused by the principle of 'horror vacuii' or the horror of emptiness (see vacuum). It was supposed that nature had an inherent dislike or fear of empty space and would go to any lengths to prevent its existence. According to this belief air rushed into the empty space created behind a projectile and pushed it along: liquid was forced upward into an empty tube simply in order to fill the vacant space, and so on.