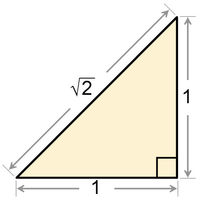 It was the first number shown to be what is now known as an irrational number (a number that can't be written in the form a/b, where both a and b are integers.) This discovery was made by Pythagoras or, at any rate, by the Pythagorean group that he founded.

The square root of 2 is the length of the hypotenuse (longest side) of a right triangle whose other two sides are each one unit long. A reductio ad absurdum proof that √2 is irrational is straightforward. Suppose that √2 is rational, in other words that √2 = a/b, where a and b are coprime integers (that is, they have no common factors other than 1) and b > 0. It follows that a 2/b 2 = 2, so that a 2 = 2b 2. Since a 2 is even (because it has a factor of 2), a must be even, so that a = 2c, say. Therefore, (2c)2 = 2b 2, or 2c 2 = b 2, so b must also be even. Thus, in a/b, both a and b are even. But we started out by assuming that we'd reduced the fraction to its lowest terms. So there is a contradiction and therefore √2 must not be irrational. This type of proof can be generalized to show that any root of any natural number is either a natural number or irrational.