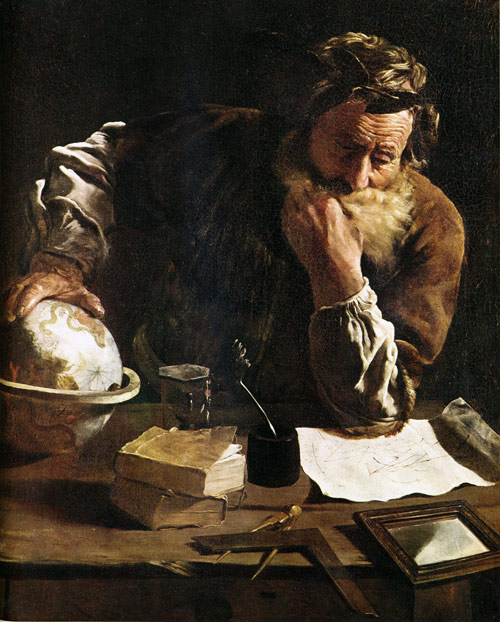 Oil painting of Archimedes by the Italian artist Domenico Fetti (1589–1624). It was painted about 1620 and measures 98 x 73.5 cm. It now resides in the Gemäldegalerie Alte Meister, in Dresden, Germany. This is just a fanciful representation. No true likeness of Aristotle survives. 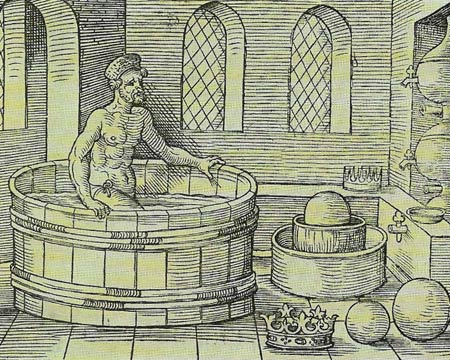 Archimedes in his bath (from a 16th-century engraving) is a reminder of his discovery that a body displaces fluid equivalent to its volume. This means that, regardless of shape, objects of equal density and weight displace the same quantity of fluid. Archimedes used the new principle to determine if a crown made for the king of Syracuse was of unalloyed gold. The crown displaced more water than the same weight of pure gold, proving that it contained other metal.

Archimedes, born in Syracuse, the son of an astronomer, was one of the most prominent of Greek scientists and mathematicians. He became a popular figure because of his involvement in the defense of Syracuse against the Roman siege in the first and second Punic Wars when his war machines helped keep the Romans at bay (see Archimedes and the burning mirrors). He also devised a scheme to move a full-size ship, complete with crew and cargo, by pulling a single rope, invented the irrigation device known as the Archimedean screw, and, according to one of many legends about him, is said to have discovered the principle of buoyancy while taking a bath and then ran into the street naked shouting "eureka" ("I found it!").

In his book The Sand Reckoner he brought to wider attention the heliocentric theory of Aristarchus and played an important role in demystifying the cosmos. To him goes the credit of constructing the first known planetarium (based on the geocentric model), a fantastic instrument of brass, powered by water, that was eventually shipped to Rome and admired there by Cicero two centuries later.

Also in The Sand Reckoner, Archimedes described a positional number system and used it to write the equivalent of numbers up to 8 × 1064 – the number of grains of sand he thought it would take to fill the universe. He devised a rule-of-thumb method to do private calculations that closely resembles integral calculus (2,000 years early!), but then switched to geometric proof for his results. He demonstrated that the ratio of a circle's perimeter to its diameter is the same as the ratio of the circle's area to the square of the radius. Although he didn't call this ratio "pi," he showed how to work it out to arbitrary accuracy and gave an approximation of it as "exceeding 3 in less than 1/7 but more than 10/71." He was the first, and possibly the only, Greek mathematician to introduce mechanical curves (those traced by a moving point) as legitimate objects of study, and he used the Archimedean spiral to square the circle. He proved that the area and volume of the sphere are in the same ratio to the area and volume of a circumscribed straight cylinder, a result that pleased him so much that he made it his epitaph.

Archimedes is probably the first mathematical physicist on record, and the best before Galileo and Newton. He invented the field of statics, enunciated the law of the lever, the law of equilibrium of fluids, and the law of buoyancy, and was the first to identify the concept of center of gravity. Has also, perhaps erroneously, been credited with the invention of a square dissection puzzle known as the loculus of Archimedes.

Many of his original works were lost when the library at Alexandria burned down and they survive only in Latin or Arabic translations. Plutarch wrote of him: "... being perpetually charmed by his familiar siren, that is, by his geometry, he neglected to eat and drink and took no care of his person; that he was often carried by force to the baths, and when there he would trace geometrical figures in the ashes of the fire, and with his finger draws lines upon his body when it was anointed with oil, being in a state of great ecstasy and divinely possessed by his science."