Archimedes and the burning mirrors 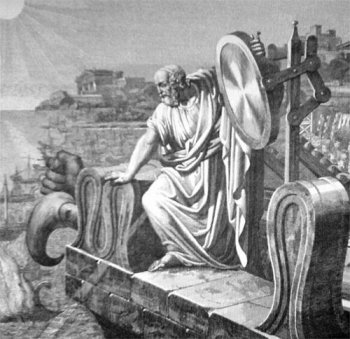 It was the time of the Second Punic War and the city of Syracuse in Sicily had made the fatal mistake of siding with the Carthaginians against Rome. So, in 216 BC, a large Roman fleet under the command of Consul Claudius Marcellus set out to besiege Syracuse and bring it to its knees.

It ought to have gone smoothly and swiftly enough for the well-drilled Romans. But they had not reckoned on the intervention of a remarkable, 70-year-old man. Archimedes, the greatest (and virtually the only) Greek technologist, was a Syracusian, born and bred. And though he despised violence and had no interest at all in military campaigns, in his home town's hour of need he turned his ingenuity upon the invaders and helped to hold them at bay for almost four years.

The Romans had never seen the like of some of the war-machines he unleashed upon them. A huge pair of pincers appeared from the city walls, grasped the hull of a ship between its jaws, shook it, and sent it crashing in ruins into the sea. Giant catapults hurled showers of heavy spears and stones onto vessels at anchor some distance from the shore. But there is one weapon that Archimedes is said to have used which is so fantastic that it defies credibility. In fairness, one of the few ancient writers to mention it is Plutarch and he had a vested interest in making Greek brains seem superior to Roman brawn.

According to Plutarch, Archimedes reflected the Sun's rays onto the Roman galleys and set them alight. Such a story, true or not, was too good for the medieval chroniclers over a thousand years later to resist. Like the tabloid journalists of their day, they embellished the tale with details of their own until history and legend became hopelessly intertwined. Some of these later writers say that Archimedes used the polished round shields of the Greek troops to concentrate the sunlight, while others insist that he focused the rays with a giant single mirror. Joannes Zonaras, a Byzantine historian of the twelfth century, wrote:

"At last, in an incredible manner, he burned up the whole Roman fleet. For by tilting a kind of mirror he ignited the air from the beam and kindled a great flame, the whole of which he directed at the ships at anchor in the path of the fire, until he consumed them all."

Evidently, Zonaras had only a tenuous grasp on the principles of optics. Archimedes, on the other hand, understood reflection as well as anyone up until the time of Newton. Yet even he would have struggled to exploit it as an incendiary weapon.

One recent piece of research looked at the effect of 440 men each wielding a polished metal mirror almost three feet across. The calculations showed that even if the men worked in concert, all pointing their mirrors precisely the same way at the same time – a difficult enough feat – the best they could hope for would be to ignite a small patch of wood 50 yards away. Such a capability would hardly have struck terror into the Romans who, in any case, were not short of a drop or two of water with which to douse any smoldering timber.

Conceivably, mirrors could have been used as an anti-personnel weapon. Fifty mirrors, say, accurately trained on the steersman of a Roman galley might have given him a nasty burn, though the prospect of the entire fleet being disabled in this way seems a bit far-fetched.

Perhaps, after all, the tale of Archimedes and his military mirrors is a product of overwrought imagination. The real damage to the Roman ships, as both Thucydides and Aeneas Tacitus claimed, may have been caused by burning gobbets of sulfur, pitch, and charcoal, lobbed from shore-based catapults. This could well have inspired the legend. As O. N. Stavroudis, of the University of Arizona, pointed out: "To the terrified Roman seamen such an attack would have seemed like great bolts of fire descending from the Sun itself. And the few surviving Greeks would perhaps allow, with half a grin, that indeed it was."