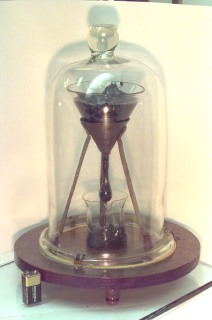 The pitch drop experiment is the world's longest running experiment. It started in 1927 when Thomas Parnell, the first professor of physics at the University of Queensland in Brisbane, Australia, heated a sample of pitch (a derivative of tar) and poured it into a glass funnel with a sealed stem. Three years were allowed for the pitch to settle, then, in 1930, the sealed stem was cut. From that date on the pitch has slowly dripped out of the funnel – so slowly that, up to the present time, only nine drops have fallen! The last one fell on July 11, 2013, and, for the first time was captured on camera.

The experiment stands in a display cabinet in the foyer of the Department of Physics at the University of Queensland demonstrating for all to see the fact that pitch, though it feels like a solid and is brittle enough to smash with a hammer, is really a fluid of very high viscosity (about 100 billion times as viscous as water.

Pitch is a black solid bitumen. It is the residue from distilling coal tar, wood tar, or petroleum, and sometimes occurs naturally. Pitch is used in road-making, for waterproofing, and for caulking seams.