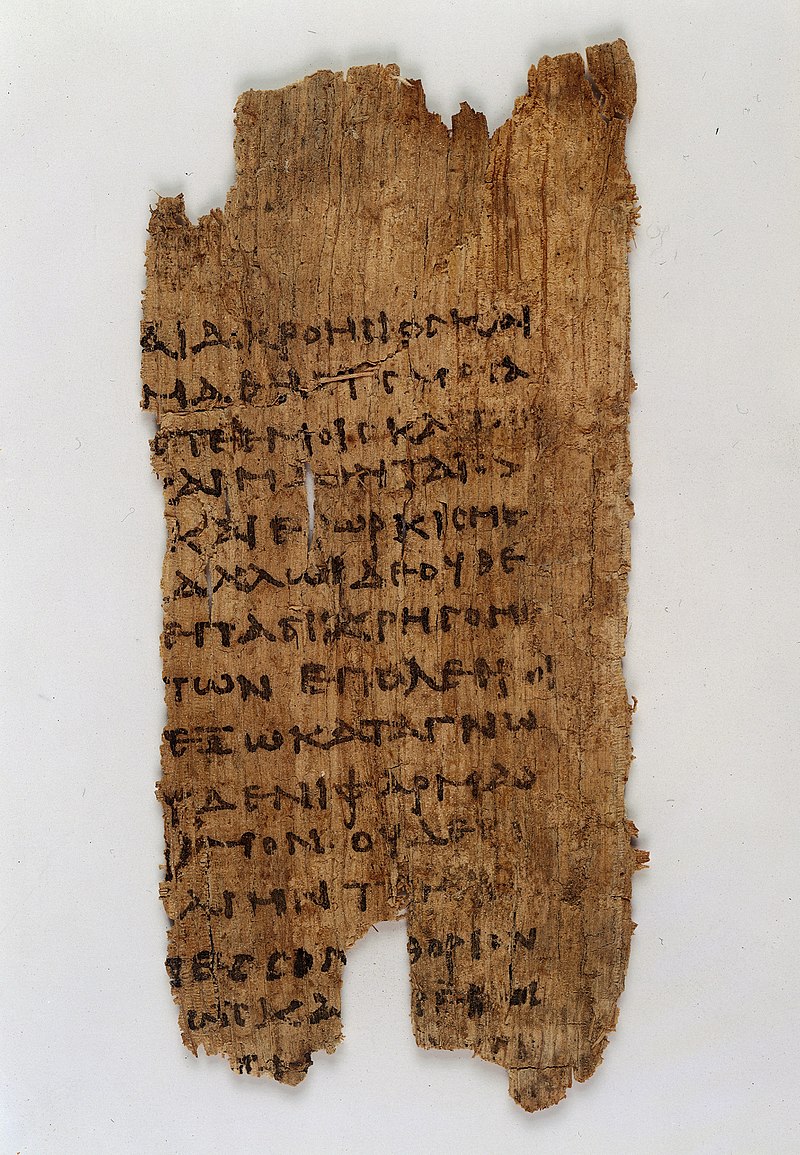 Hippocrates worked empirically, basing his judgements on the observation rather than preconceived ideas. The Hippocratic Collection, including the Hippocratic Oath that binds doctors to keep their patients' confidences, are medical works by many authors and are not necessarily of Hippocratic origin. A fragment of the oath on the 3rd-century Papyrus Oxyrhynchus 2547. 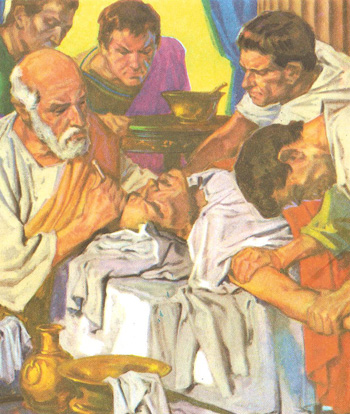 Artist's impression of Hippocrates operating on the skull of one of his patients.

Hippocrates was a Greek physician generally called 'the Father of Medicine' and the probable author of at least some of the Hippocratic Collection, some 60 or 70 books on all aspects of ancient medicine. The authors probably formed a school centered around Hippocrates during his lifetime and continuing after his death.


Hippocrates and the Hippocratic Oath

The Hippocratic Oath has governed the professional and social behavior of doctors for 2,000 years. However, although the Oath probably represents Hippocrates' views very well, it was almost certainly not written by him. There is evidence that some parts of the Oath come from ancient Egyptian medical practice, and there is also evidence that other parts were compiled only after Hippocrates's death.

Obviously the Oath was intended both for students and for experienced practitioners of medicine. With the passing of 2,000 years however, parts of the Oath have become outdated. Nowadays, although doctors still adhere to its spirit, there are occasions when its details are ignored. In Courts of Law, for instance, doctors are often obliged to disclose details of their patients which the Oath would certainly regard as secret.

Although Hippocrates is one of the great figures in history, it must be admitted that we know almost nothing about him. We do know, however, with reasonable certainty, that he was born on the little island of Kos, in the Aegean, in the year 460 BC. Some historians believe that it was here that he studied the art of medicine, and later taught his pupils. There is to this day, in the center of the town of Kos, a plane tree, under which, so it is said, Hippocrates lectured.

It seems likely, too, that Hippocrates taught on the mainland of Greece, and that he visited Athens. He died at Larissa, and though we know he was very old, between 85 and 110, even the exact date of his death is unknown.

Greek medicine before Hippocrates was based largely on magic, superstition, and religious rituals. Some diseases were, in fact, believed to be punishments wreaked upon unfortunate humans by the vengeful gods. Hippocrates thoroughly disapproved of these ideas, and throughout his life he taught and argued that all diseases had natural, not supernatural, causes. In this view, as in many others, modern medicine had proved him to be right.

Among the benefits that he brought to medical practice was his insistence that a doctor should always study his patients carefully, and so learn about the appearance and the course of every illness. In this way the doctor could learn how how each disease progressed, and would thereafter be able to forecast the outcome of similar cases accurately.

Hippocrates used only a few simple drugs, for his faith lay in the ability of the body to recover itself. This is called 'The Healing Force of Nature'. While Nature was doing the healing, however, the diet which Hippocrates ordered was often, to our minds, very strict. It consisted of gruel made from barley: with honey and water, or honey and vinegar, to drink.

Although chiefly a physician, Hippocrates did not disdain surgery. He treated fractures and dislocations, incised abscesses, and did complicated operations on the skull in cases of head injury. Some of his advice to surgeons is still applicable today: 'The nails should be neither longer or shorted than the the points of the fingers. One should practice all sorts of work with both hands, endeavoring to do it well, elegantly, quickly, neatly, and promptly.'

Greece was not the only part of the world in which the art of medicine flourished in ancient times. At Alexandria, in Egypt, a medical school grew up, and a great many medical works were collected in the Library there. Some of these became known as the Hippocratic Collection.

Altogether there were between 70 and 100 works in this collection, and the idea was that they were preserved works of the physicians of Kos. However, even the early scholars who studied these books realized that they came from a great many different sources. Indeed it is doubtful if any one book among them can be definitely attributed to Hippocrates.

Among the books in the Hippocratic collection one of the most famous is that called 'The Sacred Disease'. This book was probably written as early as 400 BC, and it gives a very clear account of the disease that today we call epilepsy. At that time this illness was generally thought to be one of the diseases caused by irate gods. It is for this reason that it became to be called 'sacred'. Although the author of the book does not know the real cause of epilepsy, he obviously has no doubt it is the result of natural causes.


Translation of the original text

I swear by Apollo, the healer, Asclepius, Hygieia, and Panacea, and I take to witness all the gods, all the goddesses, to keep according to my ability and my judgment, the following Oath and agreement:

To consider dear to me, as my parents, him who taught me this art; to live in common with him and, if necessary, to share my goods with him; To look upon his children as my own brothers, to teach them this art; and that by my teaching, I will impart a knowledge of this art to my own sons, and to my teacher's sons, and to disciples bound by an indenture and oath according to the medical laws, and no others.

I will prescribe regimens for the good of my patients according to my ability and my judgment and never do harm to anyone.

I will give no deadly medicine to any one if asked, nor suggest any such counsel; and similarly I will not give a woman a pessary to cause an abortion.

But I will preserve the purity of my life and my arts.

I will not cut for stone, even for patients in whom the disease is manifest; I will leave this operation to be performed by practitioners, specialists in this art.

In every house where I come I will enter only for the good of my patients, keeping myself far from all intentional ill-doing and all seduction and especially from the pleasures of love with women or with men, be they free or slaves.

All that may come to my knowledge in the exercise of my profession or in daily commerce with men, which ought not to be spread abroad, I will keep secret and will never reveal.

If I keep this oath faithfully, may I enjoy my life and practice my art, respected by all humanity and in all times; but if I swerve from it or violate it, may the reverse be my life.


Passages from the Hippocratic Collection

Medicine is of all the Arts the most noble; but, owing to the ignorance of those who practice it, and of those who, inconsiderately, form a judgment of them, it is at present far behind all the other arts.

life is short and the Art (of medicine) long; the occasion fleeting; experience fallacious, and judgment difficult.

For extreme diseases, extreme methods of cure . . . are the most suitable.

Persons who are naturally very fat are apt to die earlier than those who are slender.

It is thus with regard to the disease called Sacred: it appears to me to be nowise more divine nor more sacred that other diseases, but has a natural cause from which it originates like other diseases.

It deserves to be known how a shoulder which is subject to frequent dislocations should be treated. For many persons owing to the accident have been obliged to abandon gymnastics exercises, though otherwise well qualified for them; and from the same misfortune have become inept at warlike practices, and have thus perished. And this subject deserves to be noticed, because I have never known any physicians treat the case properly; some abandon the attempt altogether, and others hold opinions and practice the reverse of what is necessary.

There are many varieties of curvature of the spine even in persons of good health; for it takes place from natural conformation and habit, and the spine is liable to be bent from old age, and from pain.