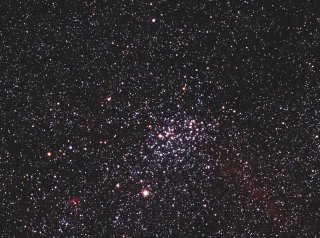 NGC 3532 is a spectacular open cluster in the constellation Carina with an estimated age of 200–350 million years. Its popular name, the Wishing Well Cluster, comes from the resemblance of its stars to coins shimmering at the bottom of a Wishing Well. It lies only 3° from the remarkable star Eta Carinae and its associated nebula. NGC 3532 was first recorded by Nicolas Lacaille in 1752.