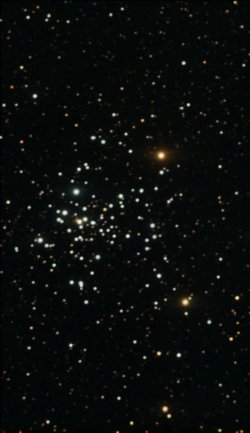 NGC 2516 is a very bright, young ( about 140 million yr old) open cluster in the constellation Carina. Also known as the Southern Beehive Cluster (because of its similarity to M44, the Beehive Cluster), it contains more than 100 stars, the brightest of which is an fifth magnitude red giant that lies near the center. NGC 2516 was first recorded by Nicolas Lacaille in 1751–52.