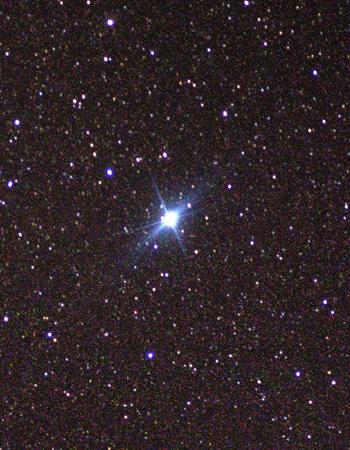 Canopus (Alpha Carinae) is the brightest star in the constellation Carina, the second brightest star in the sky, and one of the principal stars used in spacecraft navigation. It was known in antiquity as the Star of Osiris and used by Posidonius in Alexandria, circa 260 BC, in the first successful effort to plot out a degree of the Earth's surface. Its name is of uncertain origin and is variously said to come from the name of an Egyptian seaport, from the name of King Menelaus's helmsman, or from the Coptic or Egyptian "Kahi Nub" meaning "golden earth."

Canopus lies almost due south of the brightest star of all, Sirius, and nearly 53° south of the celestial equator, so that it is a (south) circumpolar object, never setting for observers south of about 40° south. By the same token it is never visible from places north of about 37° N.

Canopus is a rare F-type yellow-white supergiant, big enough to stretch three-quarters of the way across Mercury's orbit. It may already have been a red giant, or it may still have to pass through that phase, before ending its days as a massive white dwarf, possibly with a neon-oxygen composition.

In Frank Herbert's 1965 novel Dune, Canopus is the home star of Arrakis (informally known as Dune).