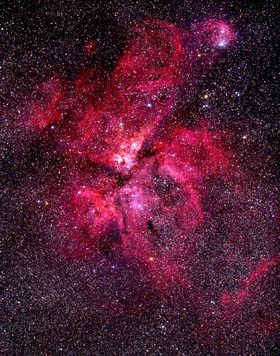 A wide-field view of the Eta Carinae Nebula. 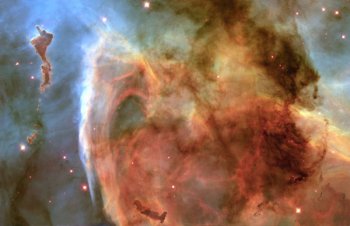 The Eta Carinae Nebula (NGC 3372), also called the Carina Nebula or the Great Nebula in Carina, is a spectacular diffuse nebula in the constellation Carina – one of the largest and brightest in the sky. Indeed, the Eta Carinae Nebula (NGC 3372) is one of the largest HII regions in the entire Milky Way Galaxy – four times larger than the Orion Nebula (which itself is part of the Orion Molecular Cloud Complex). The only reason the Carina Nebula isn't better known is that it cannot be seen from most of the northern hemisphere. It was discovered by Abbé Nicolas Louis de Lacaille during his 2-year journey to the Cape of Good Hope in 1751–52.

In addition to Eta Carinae itself, the Nebula contains several stars that are among the hottest and most massive known, each about 10 times as hot, and 100 times as massive, as our Sun.

The Keyhole Nebula (NGC 3324) is a dark cloud, whose round portion is some 7 light-years across, that is silhouetted against the brighter background near Eta Carinae.