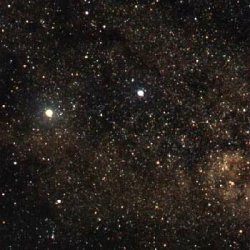 Hadar consists of a pair of almost identical, giant B stars, each some 55,000 times more luminous and 15 times more massive than the Sun separated by about 3 AU with an orbital period of just under a year. A fourth magnitude sibling, Hadar-B, 1.3 arcsecond away, is difficult to see and study because of the brightness difference but, as a B-type dwarf, is an impressive star in its own right, with a mass of 5 solar masses and a luminosity 1,500 times that of the Sun. Hadar-B orbits the main pair at a minimum distance of 210 AU with a period of at least 600 years. The twins that make up Hadar-A are some 12 million years old and due to quickly expand to become red supergiants prior to exploding as supernovae. One of the twins is also a Beta Cephei star, subtly varying with multiple periods of less than a day.