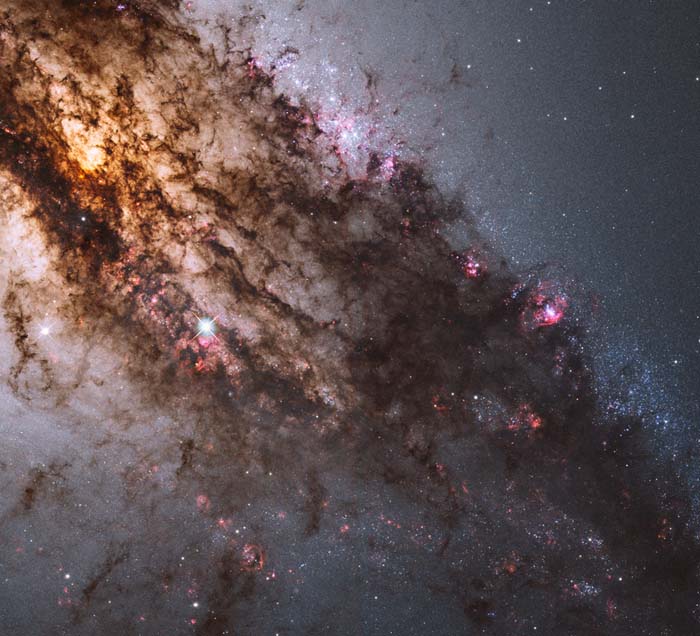 Dark lanes of dust crisscross the giant elliptical galaxy Centaurus A. This image, taken with Hubble's Wide Field Camera 3 in July 2010, reveals the glow of young, blue star clusters and a glimpse into regions normally obscured by the dust. The warped shape of Centaurus A's disk of gas and dust is evidence for a past collision and merger with another galaxy. The resulting shock waves cause hydrogen gas clouds to compress, triggering a firestorm of new star formation. These are visible in the red patches in this Hubble close-up. Credit: NASA, ESA, and the Hubble Heritage (STScI/AURA)-ESA/Hubble Collaboration. 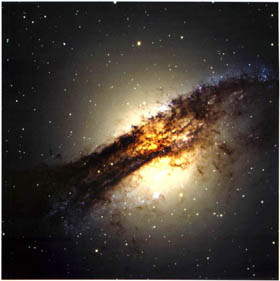 Centaurus A (NGC 5128) is the second strongest extragalactic radio source in the sky (after Cygnus A) and the nearest radio galaxy and active galactic nucleus to the Milky Way; it lies in the constellation Centaurus, just over 11 million light-years away in the M83 group of galaxies. Cen A's optical counterpart, discovered by James Dunlop in 1826, is an unusual elliptical galaxy (NGC 5128) bisected by a dark circumgalactic dust belt that appears to be debris from a merger between the elliptical and at least one spiral galaxy over the past few billion years.

At radio wavelengths, Cen A show two vast lobes of radio emission, that extend thousands of light-years in opposite directions along the polar axis of the disk of NGC 5128. The most active radio emission, however, is associated with Cen A's compact core which is the foremost example of a radio-loud active galactic nucleus and, at only 10 light-days across, the smallest known extragalactic radio source. Infrared measurements have revealed high-speed motions in this core that indicate a fast-spinning disk containing some 200 million solar masses of material. These data confirm a previous suspicion that the active nucleus of Cen A is powered by a supermassive black hole with a mass of about 100 million solar masses.


Spiral arms of Cen A

As a result of the collision in which Centaurus A gained its famous wide dust lane, it also, observations published in 2012 revealed,[1] sprouted a pair of spiral arms – making it unique among all known elliptical galaxies. However, the spiral arms of Cen A are not made mostly of stars as in the case of spiral galaxy like the Milky Way but instead of molecular gas. The arms were discovered from a detailed study of the dust lane region at the radio wavelengths emitted by carbon monoxide molecules. Such structures may exist in other elliptical galaxies, too, but would not be easy spot at great distances.