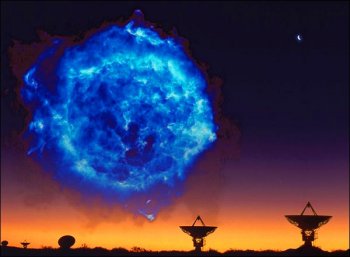 A radio image of Cassiopeia A hangs above the National Radio Astronomy Observatory's Very Large Array. The picture, by Michael Bietenholz using data from the NRAO and Rick Perley, was a prize-winner in the NRAO/AUI Radio Astronomy Image Awards.

Radio astronomy is the branch of astronomy devoted to making observations of the universe in radio waves using radio telescopes, radio interferometers, and other types of antennae. Radio astronomy began through the pioneering work of Karl Jansky and Grote Reber.

Among the processes by which astronomical bodies emit radio waves are:

• Thermal radiation from solid bodies such as the planets.

• Thermal radiation, or bremsstrahlung, from hot gas in the interstellar medium.

• Spectral line radiation from atomic and molecular transitions that occur in the interstellar medium or in the gaseous envelopes around stars.

Among the important radio sources that have been probed by radio astronomers are quasars, radio galaxies, the center of the Milky Way Galaxy, pulsars, masers and other emission by interstellar molecules including the 21-centimeter line of neutral hydrogen, solar flares, sunspots, and the cosmic microwave background.

The strongest, apart from the Sun, is Cassiopeia A, followed by Cygnus A and the Crab Nebula (Taurus A). (The capital letters following the name of a constellation refer to the radio sources of the constellation, A being the strongest source, B the second strongest, and so on). Radio sources are divided into two main categories: Class I, which are those associated with our Galaxy, and Class II, which are extragalactic. Most radio sources are galaxies, supernova remnants, or H II regions.