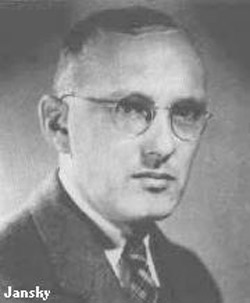 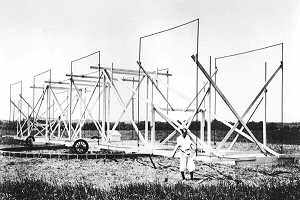 Karl Jansky was an American engineer of Czech descent who first identified radio waves from beyond the Solar System.

As a research engineer at the Bell Telephone Company, Jansky was asked to track down and identify the various types of interference from which radio telephony and reception were suffering. The company was particularly concerned with interference at wavelengths of around 15 m (then used for ship-to-shore radio communications), only some of which could be explained in terms of thunderstorms, nearby electrical equipment, or aircraft. By building a high quality receiver and antenna system that was mounted on wheels and could be rotated in various directions, Jansky was able to identify a new kind of static. He had noticed that the background hiss on a loudspeaker attached to the receiver and antenna system peaked every 24 hours. From overhead it seemed to move steadily with the Sun but gained on the Sun by four minutes a day-a period that correlates with the difference of apparent motion, as seen on Earth, between the Sun and the stars. Jansky realized that the source must lie beyond the Solar System. By the spring of 1932 he tracked down the source to the direction of Sagittarius – the same direction in which Harlow Shapley and Jan Oort confirmed the center of the Milky Way Galaxy lay. Jansky published his results in December 1932. In the May 5 issue of The New York Times Jansky's discovery made front-page news – and radio astronomy was born. The NYT article noted that: "There is no indication of any kind, Mr. Jansky replied to a question, that these galactic radio waves constitute some kind of interstellar signaling, or that they are the result of some form of intelligence striving for intergalactic communication." Nevertheless, Jansky's breakthrough can also be seen as the starting point, not only for radio astronomy, but for interstellar SETI.

Initially, astronomers showed little interest in Jansky's results and treated his galactic origin theory with skepticism. However, a young radio ham, Grote Reber, was encouraged by the findings to build in 1938 what was the world's first dedicated radio telescope – a 10-m (30-ft) parabolic dish, with which he discovered several new cosmic radio sources. Widespread interest in radio astronomy didn't start until after World War II, the first giant instruments devoted to this new science, such as the one at Jodrell Bank, coming into operation in the late 1950s.

The jansky (Jy) is a unit used by astronomers for measuring the radio flux density from radio sources. It was named in 1973 by the International Astronomical Union in honor of Karl Jansky. One jansky equals 10-26 watts per square meter per hertz. Pitifully small though this seems, it measures extraordinary small quantities. Were you to use all the energy ever collected from cosmic radio sources to heat a single cup of coffee, you would still have a cold drink