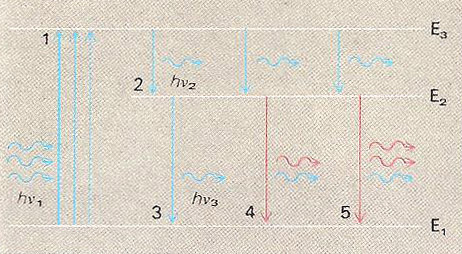 Energy-level diagram illustrating the maser principle for a three-level system. (1) Atoms of the maser material, normally in the ground state (E1), are "pumped" to an excited state (E3), in this case by absorbing photons (blue) of suitable energy (hν1 = E3 - E1), say, from a powerful light source (optical pumping). The atoms return to the ground state by a two-stage process: first (2) falling to level (E2), spontaneously emitting a photon (hν2 = E3 - E2), and then (3) decaying to the ground state, spontaneously emitting a further photon (hν3 = E2 - E1). (4) An hν3 photon interacting with another atom in state E2 can induce it to emit a further hν3 photon (red) which is in phase with the inducing photon. This process, known as stimulated emission, can continue throughout the maser material (5) as long as there are more atoms in state E2 than there are in E1 (otherwise E1 atoms will absorb more hν3 photons than the E2 atoms emit). This results in the build up of a large quantity of coherent radiation, effectively amplifying the original hν3 signal. Three-level systems are also commonly employed in lasers, these using light rather than microwave photons.

A maser is a source of very intense, narrow-band, coherent microwave radiation. 'Maser' stands for 'microwave amplification by stimulated emission of radiation.' Masers (and their optical counterpart, lasers) involve the interaction between an electromagnetic wave of a certain wavelength and an atom or a molecule in a suitable (excited) energetic state. The passage of the wave triggers the atom/molecule to give up energy in the form of more radiation of exactly the same wavelength. This reinforces the passing wave, which can then interact with more excited atoms to build up a well-directed, intense pulse of monochromatic (single-wavelength) radiation.

The principle of the maser was discovered by Charles Townes of Columbia University, for which he shared the 1964 Nobel Prize in Physics with Nikolai Basov and Alexander Prokhorov, who also worked in this field. The first maser used electrostatic (charged) plates to separate high-energy ammonia molecules from low-energy ones. Radiation of a certain frequency stimulated the high energy ammonia molecules to emit similar radiation and strengthen the signal. The very narrow frequency emitted made the ammonia maser one of the most accurate atomic clocks known.

Several types of interstellar maser have been identified but, as yet, no optical or infrared astrophysical lasers. A megamaser is an extremely powerful maser associated with an active galactic nucleus. Megamasers, the most powerful of which are the OH (hydroxyl) and H2O megamasers, are up to a million times more powerful than stellar masers found within the Milky Way Galaxy.