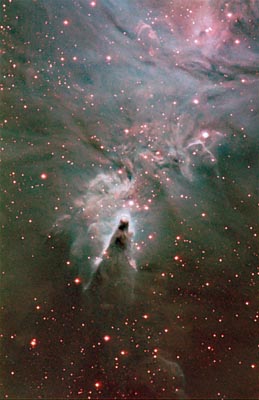 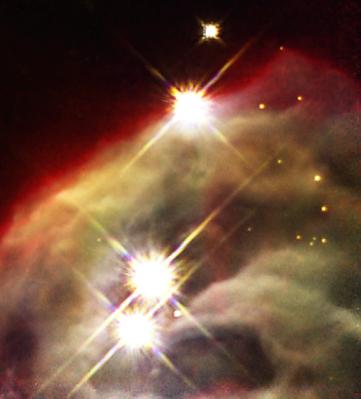 The Cone Nebula is a diffuse nebula and associated open cluster, the Christmas Tree Cluster (NGC 2264), in the constellation Monoceros; William Herschel discovered both, in 1785 and 1784, respectively.

The distinctive cone shape is a dusty pillar about 7 light-years long, the edges of which are bathed in ultraviolet light by nearby hot stars and caused to release gas into the relatively empty region of surrounding space. There, further irradiation makes the hydrogen gas glow, producing the red halo and tendrils of light seen around the pillar. The Cone belongs to a much larger complex that is the site of active star formation.


Hubble close-up of the Cone

The Hubble Telescopes's Near Infrared Camera and Multi-Object Spectrometer (NICMOS) obtained the remarkable image below of the upper 0.5 light-year of the Cone Nebula, revealing a dense, craggy edifice of dust and gas. Radiation from hot, young stars (located beyond the top of the image) has slowly eroded the nebula over millions of years. Ultraviolet light heats the edges of the dark cloud, releasing gas into the relatively empty region of surrounding space. In peering through the dusty façade to the nebula's inner regions, NICMOS has unmasked several stars (yellow dots at upper right). Astronomers don't know whether these stars are behind the dusty nebula or embedded in it. The four bright stars lined up on the left are in front of the nebula.