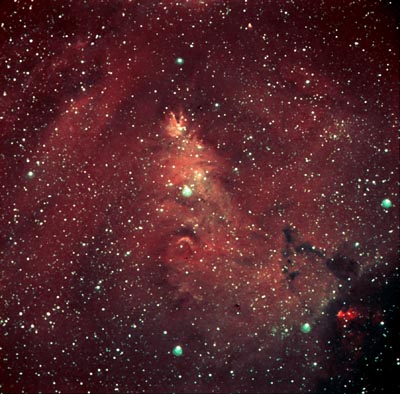 The Christmas Tree Cluster (NGC 2264) is an open cluster of about 40 stars in the constellation Monoceros, which is immersed in nebulosity and forms the nearly perfect outline of a fir tree. The fifth magnitude star S Monocerotis (also known as 15 Mon) lies at the base of the Cluster. It is an O7 giant, about 8,500 times as luminous as the Sun, which varies in between magnitudes 4.2 and 4.6. S Mon forms a visual double with a 7.5 magnitude companion lying just 2.8 arc-seconds away. Another reasonably bright star, immediately to the north of the Cone Nebula, marks the apex.

The Christmas Tree Cluster, which was named by L. S. Copeland, and the Cone Nebula were both discovered by William Herschel in 1783.

NGC 2264 may be physically associated with the Rosette Nebula, a faint bridge of faint nebulosity possibly linking the two.