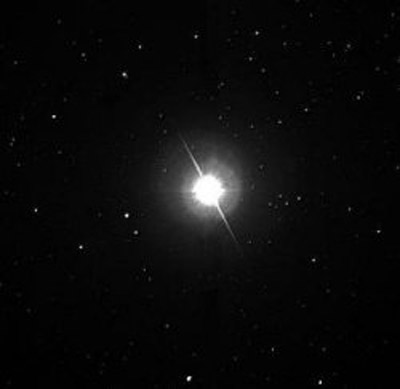 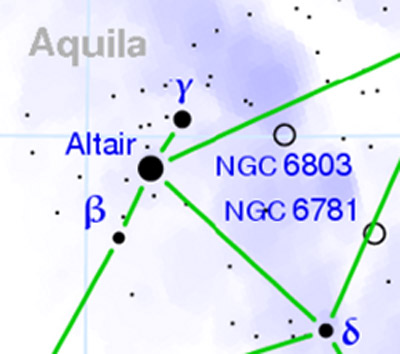 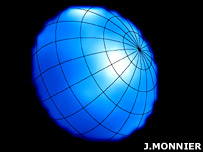 The first image of Altair's surface.

Altair is a white A star that, at a distance of under 17 light-years, is one of the nearer solar neighbors. It is moving relatively fast against the background of distant stars and will shift by as much as a degree over the next 5,000 years. It is also a rapid rotator with an equatorial spin speed of 242 km/s, compared with the Sun's 2 km/s. As a result, despite having a radius greater than that of the Sun, Altair manages to complete a rotation every nine hr. Its estimated age is less than one billion years.

In 2007, Altair became the first star, other than a giant or supergiant star (such as Betelgeuse), to have its surface features imaged. This feat was achieved by combining the light of four telescopes at Georgia State University's Center for High Resolution Angular Astronomy (CHARA). The results confirmed that Altair is spinning so rapidly on its axis that it is stretched out into an elongated shape. The image of Altair obtained by CHARA also revealed that the amount of distortion and changes in surface temperature at the equator differed from those predicted current theoretical models.

Among many science fiction references to Altair, the planet Altair IV is the scene of the book and film Forbidden Planet. The planets Altair III, IV, and V are mentioned in various episodes of Star Trek. Although no planets have actually yet been detected by astronomers around Altair, extrasolar planet detection remains in its infancy and it remains entirely possible that future studies will reveal that Altair does indeed have a system of worlds. However, the star's relative youthfulness suggests that any life on such worlds would be quite primitive.