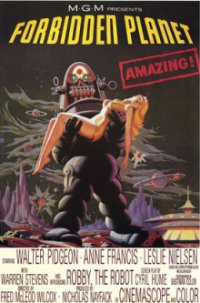 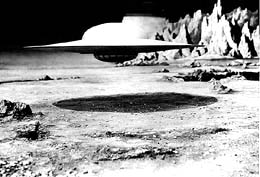 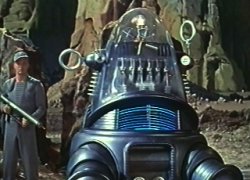 Forbidden Planet is a science fiction film and subsequent novel written by W. J. Stuart. Released in 1956, Forbidden Planet was one of the most sophisticated of the pre-Space Age SF films. In it, a human crew journeys to the stars in a spacecraft indistinguishable from a flying saucer, and encounters the still-working artifacts of a long-dead civilization, the Krell. The plot was loosely based on Shakespeare's play The Tempest, with Walter Pidgeon cast in the role of Prospero. The film features a number of spectacular special effects, ground-breaking use of an all-electronic music score, and was the first screen appearance of the famous Robby the Robot.

In 2257, the United Planets Cruiser C-57D is sent to the planet Altair IV in the Alpha Aquilae star system, to find out what happened to the Bellerophon Expedition, sent out some twenty years earlier. As their ship arrives, the crew detects some immense power source scanning the ship. They are contacted by a survivor, Doctor Edward Morbius (Walter Pidgeon), who warns them to go away, but won't say why. Upon landing, they are met by Robby the Robot, who takes them to Morbius' home. Morbius explains that within a year of the expedition arriving, some unknown force had wiped out nearly everybody overnight. Only he, his wife (who later died of natural causes), and his infant daughter survived. Morbius fears that the same fate may await the crew of the C-57D. He and his daughter have remained unharmed, and his house has an interesting array of high-tech defenses. Commander Adams (played by Leslie Nielsen) begins to question Morbius' technological abilities, as his speciality was in philology, the study of languages.

For twenty years, Morbius tells the commander, he has been reconstructing the history and some of the minor technologies (such as Robby) of the Krell, the extinct natives. They had had a technology far in advance of that of the humans, but had all died two hundred thousand years before in one mysterious night of destruction. Morbius shows the crew a Krell nursery, which includes an "educator" machine that instantly killed one person who tried it. He explains that it put him into a coma for almost two days, though he recovered with a doubled IQ.

Morbius then takes them on a tour of the Krell underground facilities. A vast underground machine powered by a countless number of thermonuclear reactors has been operating, self-repairing and self-maintaining, purpose unknown, since the extinction of the Krell. The effects shots of the Great Machine are well done, showing enormous, miles-deep shafts with huge and incomprehensible structures moving up and down with vast energy discharges passing between them.

Things get interesting for the captain when he meets Morbius' beautiful but extremely naive daughter, Altaira (Anne Francis). Nineteen years old, she is very curious about human relations. The commander and his executive officer compete for the privilege of enlightening her on this topic, establishing the tradition so avidly followed by James T. Kirk.

That night, while Morbius sleeps in the Krell nursery, power meters all round the walls start lighting up and the ship is attacked by an invisible monster made of pure energy. This creature is a spectacular special effect: a roaring, gigantic armless biped revealed only in outline by the energy from the ship's defensive neutron-particle-beam guns that flicker over its surface. Morbius is awakened by his daughter, screaming from a nightmare. The attacker vanishes and the power meters revert back to near zero.

Later, the ship's doctor sneaks in to use the educator machine. Before he dies from its effects, he gasps out his revelation: the huge machine was designed to let the Krell materialize anything they wanted at a mere thought. But: "They forgot one thing, John. Monsters! Monsters from the Id!" Though the Krell considered themselves civilized, their subconscious minds were unleashed by the almost limitless power of the Machine. The race was wiped out in one night of frenzied destruction, as it acted out their darkest subconscious urges.

With this clue, the commander realises that Morbius' sessions with the Educator had attuned his mind to the machinery. Although Morbius' conscious mind was not strong enough to control the Machine, his subconscious could and did, directing the attacks first against the Bellerophon party when they voted to return to Earth, and now the rescue ship. His deepest desire is simply to be left alone to study the Krell, and his subconscious is using the Machine to fulfill that wish. Ultimately, Altaira declares her love for the commander and chooses to leave the planet with him, despite the risks posed by this defiance of her father.

In the climactic attack, the monster breaks into the inner sanctum to which the principals have fled - the Krell nursery with its power monitors. Morbius, finally accepting the awful truth that the enemy is his own subconscious, throws himself between the monster and his daughter. He is mortally injured, causing the monster to disappear. As he lies dying, he directs the commander to initiate the self-destruction of the Machine. He has realized that it is far too dangerous to be used by any race that can not fully control its subconscious desires.

[Source of plot summary: Wikipedia. Text is available under the terms of the GNU Free Documentation License]

· The model of the flying saucer-style space cruiser was retained by the MGM prop department and subsequently used in a number of productions on the MGM lot, including an episode of the The Twilight Zone (1959). Robby the Robot and his ground transporter would be used on that show as well.

· In preparing the film for production, MGM borrowed a print of This Island Earth (1955) from Universal-International.

· The planet on which Edward and Altaira Morbius live is Altair IV, which according to Star Trek: Deep Space Nine (1993) is also a Federation planet. Director Fred M. Wilcox consulted with scientists before making the decision that the planet's sky would be green.

· Robert Kinoshita, who is credited as building Robby the Robot, was also Art Director for the TV series Lost in Space (1966). Many of the Lost in Space robot's features parallel Robby's: glass head with animated elements; rotating antenna ears; flashing light mouth, and chest panel with more animated elements. Much of the layout of Forbidden Planet's spaceship is mirrored by the Jupiter 2 on Lost in Space including the saucer shape, integral landing gear/entry stairs, lower external dome with animated lights, central plexi-domed navigation station, and vertical hibernacula arranged along perimeter. In addition, Robby and the Lost in Space robot had a couple of reunions in two Lost in Space episodes: #1.20, "War of the Robots" and #3.1 "Condemned of Space".

· When Forbidden Planet was first released theatre goers were given special paper glasses with red lenses. The glasses were to be used during certain scenes involving the invisible monster. Theater-goers were alerted that it was time to put on the special glasses by flashes on the screen. When the special glasses were put on the invisible monster was revealed.